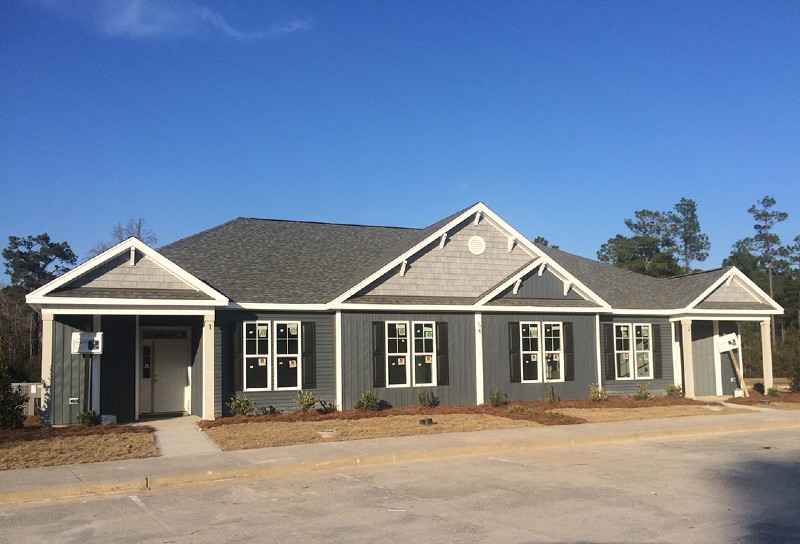 A duplex townhome is shown previously under construction at The Pines at Highland Forest. (Photo courtesy of Masonboro Construction and Development Inc.)
A Florida-based venture recently purchased 58 rental units in a Shallotte townhome community, according to an announcement from a local commercial real estate firm.

Transcendent Electra is a joint venture between two private equity firms, Transcendent Investment Management and Electra America. TE was formed to invest in homes in suburban neighborhoods in North Carolina, South Carolina, Florida, Georgia, Texas and Tennessee, a TE news release stated in February, with the anticipation of acquiring and developing 15,000 new single-family units over the next five years.

Of the local transaction, Johnson of Sun Coast Partners said, “Much of the nation has seen this type of single-family rental (SFR) and built-for-rental (BFR) product become the darling of real estate investors. In general, these communities are made up of townhomes in the form of duplexes up to quadplexes.

“Multifamily apartment sales continue to be very strong, but the growth has been much more aggressive in the smaller SFR/BFR segment," he added. "This also serves as workforce housing and as an alternative to a large apartment complex – SFR/BFRs have backyards, common green spaces and in general more living space than traditional apartments.”

Another 30 units under construction in The Pines at Highland Forest are under contract for an undisclosed amount with Transcendent Electra, the Sun Coast Partners release stated.

While SFR/BFR housing represents more affordable housing compared to single-family homes for purchase, the release stated, "the rapid growth in rental rates is of concern. This type of residential rental appeals to seniors as well as young teachers, police, nurses and other more typical renters we're used to seeing."

Rose of Sun Coast Partners said in the release, "Our client is actively looking for more BFR opportunities and can contract and close very quickly."