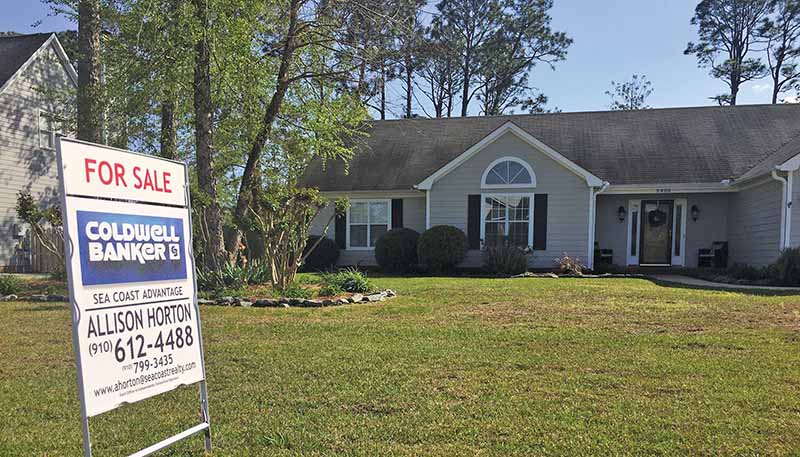 A home is shown for sale in April 2020. This year, July numbers showed a slowdown in the housing market. (File photo)
For Trey Wallace, the sharp dip in the number of homes sold in July isn't terrible news.

CFR reported a 20% decline in the number of homes sold in the Wilmington area last month compared to July 2020.

"I'm not concerned at all. I think it's probably a good thing," Wallace said. "While it was a great ride for sellers, buyers have really been getting the short end of the stick."

He said it appears buyer sentiment is the No. 1 reason behind the drop. His evidence includes a Fannie Mae survey from July in which 66% of respondents said they believed it was a bad time to buy.

"Nobody should be forced to make an offer on a house before they see it. Nobody should be forced to offer 10% over list price because it’s got 15 offers," Wallace said, describing circumstances in the area's current market. "Nobody wants to work in a market like that. It's not fun. Everybody's stressed out. Buyers don’t like it; agents don’t like it. Sellers love it, but it’s just not a healthy place to be. I’ve been expecting this kind of sea change for a while."

The CFR report released Thursday stated that the region continues "to feel the effects of the constrained housing supply."

The report, based on N.C. Regional Multiple Listing Service data, noted that in July this year, New Hanover, Brunswick and Pender counties saw decreasing numbers across the board in new listings and closed and pending sales.

It was the first month this year, the report stated, that the region experienced a decline in the housing market.

But Tim Milam, CEO of Wilmington-based Coldwell Banker Sea Coast Advantage, said he is also not concerned for several reasons.

"First of all, there are a lot of houses that are being built right now by builders that are not in our MLS," he said.

That's because of fluctuations in the price of materials. Builders are waiting, Milam said, until they get the sheetrock installed before they put a price on a home and list it.

He said he thinks the market will pick back up again, and that even though prices are increasing, buyers will still be purchasing new homes because interest rates remain low.

New listings decreased 5.5% over July 2020 while pending sales fell over 16% year over year, according to the CFR report. There were 315 fewer closed sales last month than in July 2020.

Tom Gale, this year's president of CFR, said in the report, "Although the average days on market is still well below what it was this time last year, the slight increase in homes for sale in July versus June is an encouraging sign for home buyers."

He said the housing market usually starts to slow down as the summer wanes and school starts again.

Gale added, "This fall may be the right time for home buyers that haven't had luck finding their home so far in 2021.”