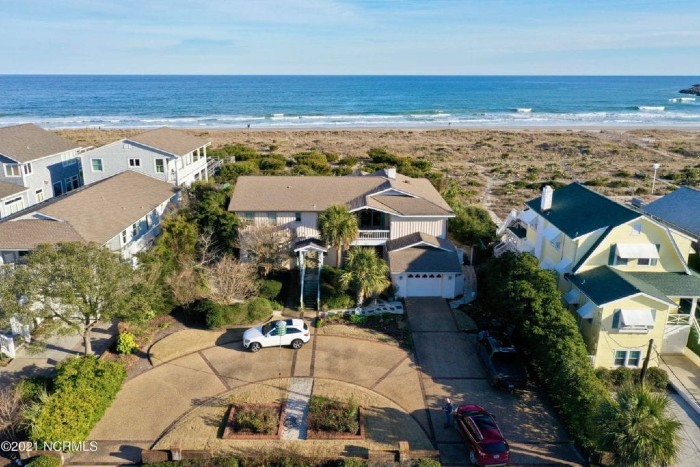 The home at 831 S. Lumina Ave. in Wrightsville Beach sold for $6 million in March, an area record. (Photo courtesy of Just For Buyers Realty)
New Hanover County's most expensive home sale record has been broken again, according to a report issued this week.

"For 15 years, the highest price on the books stood at $5,264,000 for a property that closed in August of 2005. That record was topped in September 2020 by roughly $13,000," stated a news release from Wilmington-based Just For Buyers Realty. "It was broken again the very next month by a house that sold for $5.5 million and that record was exceeded again in March."

The South Lumina Avenue home on the Wrightsville Beach oceanfront is 4,000 square feet and has six bedrooms.

The listing agent, Ginny Hollingsworth, grew up in the home, according to the release. Her parents bought it in the 1940s, and she decided to sell it after her mother, Virginia C. Trask, passed away in January. The selling entity was the Virginia C. Trask Revocable Trust, and the buyer was Masonboro Inlet View LLC, according to New Hanover County property tax records.

“My brother and I had the best times there,” Hollingsworth said in the release, “but neither of us wanted to move back. It was time for another family to make their memories.”

Hollingsworth said her mother went on cruises all over the world, but of the Wrightsville Beach house, she would say that she got to "come home to paradise."

In addition to the record home sale, March was the most prolific month ever recorded in the area for luxury sales, with 52 high-end homes sold, according to the report.

That tops a record of 47 luxury home sales set in August 2020 and then tied in October 2020, stated the Just For Buyers Realty report. "Luxury home" is defined as those priced at $1 million or more.

“Saying we’re breaking records is starting to sound like a broken record,” said Kathleen Baylies, broker in charge of Just For Buyers Realty, in the release. “The record that was broken just last August stood for 15 years. Since then, it’s been broken twice.”

Another 30 luxury homes went under contract, and 48 more homes came on the market with an asking price of $1 million or more, the release stated.

“The four dozen homes that came on the market will prove crucial to keeping this streak going,” Baylies said in the release. “Inventory is way down from last year. It’s down 65% in Pender County, 53% in New Hanover and 44% in Brunswick County. That’s bound to push prices higher, which may prompt more owners to consider selling.”

Correction: This story was changed to reflect that the $6 million home sale was at the time the highest-priced sale in just New Hanover County. Brunswick County had a previous home sale that fetched a higher price.