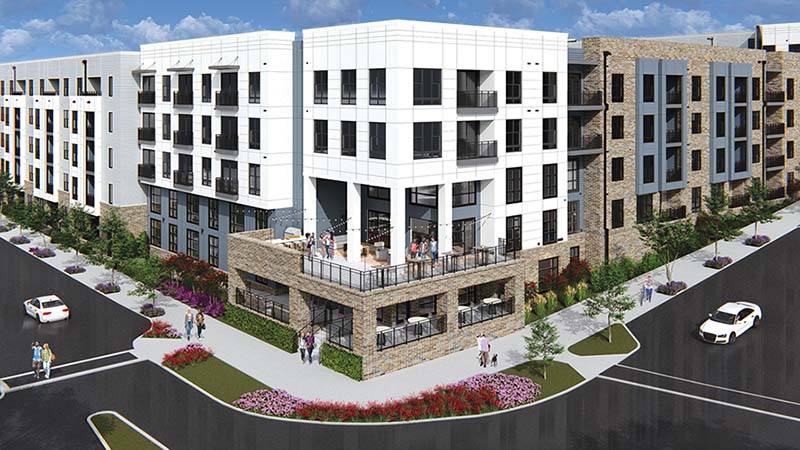 A rendering shows The Flats on Front in downtown Wilmington, an apartment complex nearing completion. (Rendering c/o Porter Jones)
Wilmington’s apartment market is a seasonal one, more so than any oth­er market in the state, according to developer Porter Jones of DPJ Residential.

Jones developed one existing apartment complex in Wilming­ton, Mayfaire Flats, and has two others in the works, The Flats on Front in downtown Wilming­ton and 17 Social on South 17th Street.

“The peak leasing season in Wilmington is late spring and ear­ly summer and the winter months are the low leasing months,” Jones said Jan. 8. “In the peak months, we typically average around 20 to 30 leases per month but can have months during the winter season with less than 10 leases per month.”

Because of the coronavirus pan­demic, 2020 was a bit abnormal, Jones said. Spring saw less leasing, while fall ended up being stronger than usual.

“So far, this winter has been fairly slow but in line with previ­ous years,” Jones said.

As growth in the region contin­ues, apartments remain on the rise throughout the Wilmington area, with more units on the way.

Adam Sosne, CEO of McAd­ams Homes, has developed over 1,000 apartments in the Wilming­ton area in the past 10 years and is working on more up-and-coming projects.

For Sosne, building a certain type of product when it comes to apartments is important.

“Originally we built student housing, and as we transitioned over the last five, six or seven years out of student housing more into conventional [apartment communities], our niche has been a nice but affordable product,” Sosne said.

Occupancy is high in existing communities.

“We still own the Stephens Pointe apartment project [in Scotts Hill]. Since we built that in 2014 it’s always full; very rarely does it ever get below 97, 98% occupied, and then when it does, it leases back up,” Sosne said. “We’ve seen continued demand in that area up there, especially for the product we like to build.”

Southwood Realty purchased Belle Meade, a 324-unit complex at 1109 Matteo Drive off Carolina Beach Road. “Southwood is a first-class organization, and I am confident they will continue to build upon the past success of the community,” Sosne said in a news release about the sale.

“Leasing started off slow in March, April and May of 2020 likely due to both COVID-19 restrictions as well as residents having to deal with on-site construction. Since May, though, leasing velocity has really picked up and now that we are completed with construction and our full amenities are coming online, we expect leasing to be strong in 2021,” Jones said.

He said 17 Social’s first units will likely be complete by early summer this year.

“Given 17 Social’s proximity to New Hanover Medical Center, we are excited about the new partnership with Novant Health and the growth prospects that are planned for the hospital,” Jones said.

For Sosne, consistency has been one of the keys to success.

“Everything we’ve done here in Wilmington is the same thing other than the difference between student housing and conventional,” Sosne said. “We’ve replicated over and over again: good location, nicer product with nice finishes and good amenities at an affordable price. Within that model, every time we’ve done it, they’ve leased up right away and they’ve stayed full.”

He said he hasn’t seen occupancy drop below 95% in the past several years.

“Traditionally, you would think of the apartment communities being younger people who are just out of school who have not yet been homeowners and who are renting before they move on to buy a home, and that’s not the case anymore,” Sosne said. “We see a lot of diversity in our tenant types and so we see those young adults who are just out of school who haven’t bought yet, we see people who are new to the area who want to rent to try to get an idea of where they want to live, where they want to buy a house … and then we see a lot of retirees now and people who just want the freedom of not having to own a home.”

Jones said what drives demand for apartments is both population and employment growth.

“Although employment growth has not been very robust in Wilmington (compared to Charleston, Raleigh and Charlotte), population growth has been strong in Wilmington,” Jones said.

He said he believes COVID-19 has changed a lot of people’s minds as to where and how they want to live.

“With most folks now working from home, we have seen an increase in people moving to Wilmington from the Midwest and the Northeast who are looking for a lower cost of living, better weather and overall more convenient lifestyle,” Jones said. “If Wilmington continues to be an attractive place for people to move to, I believe demand for apartments, both urban and suburban, will continue to be strong.

“If Wilmington can start seeing some significant employment growth, I would expect demand for apartments to far exceed the current supply.”