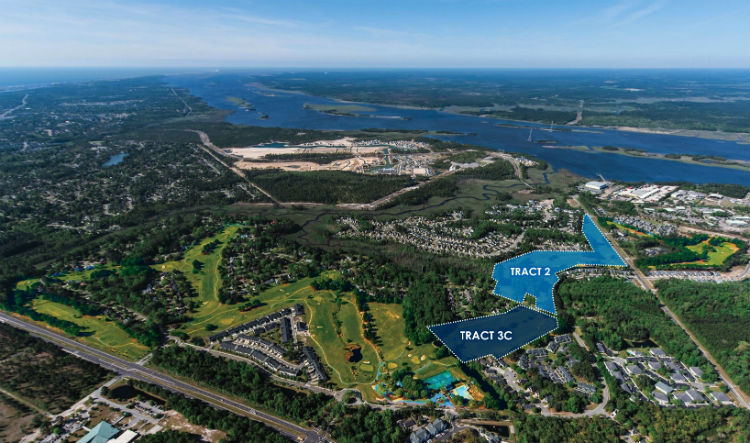 The upcoming townhomes, part of the Woodlands at Echo Farms, will be different from those in a recent project, Woodlands Landing, in that they will be for sale rather than for lease, the developer said.

"We see high demand for both single-family and townhomes," Brian Eckel, of GHK Cape Fear Development and Wilmington-based commercial real estate firm Cape Fear Commercial, said in an email. "We started leasing Woodlands Landing just as the governor shut down NC in April and we are now over 92% leased."

He said Wilmington continues to be top-ranked in the country for inbound moves "and we don’t see that slowing down in the near future. Builders and residential Realtors need inventory right now, so we think our timing is good.

"Additionally, with the recent start to the new Harris Teeter on the corner of Independence and Carolina Beach Road, we believe the property values throughout the submarket will benefit."

Another Echo Farms project, Riverwood, is set to include 86 townhomes and 120 garden-style apartment units on 17 acres at 4080 Independence Blvd.

The Woodlands at Echo Farms, 4114 Echo Farms Blvd., is part of a redevelopment of portions of Echo Farms, replacing the neighborhood's golf course.

Four years ago, Echo Farms residents filed a lawsuit to try to halt the development. The residents and the owner of the golf course, Matrix Development Group, reached a settlement in 2017.

The city of Wilmington and New Hanover County announced in 2018 that they were purchasing 14 acres in Echo Farms, including tennis courts and a pool that were eventually revamped. The facilities had previously been part of Echo Farms Golf & Country Club, and saving them was a goal of residents.

The developer continues to involve Echo Farms homeowners in the planning of the Woodlands at Echo Farms, Eckel said.

"We worked together from the beginning with Save Echo Farms [a residents' group] and continue to stay in touch with them, working together to refine our plan and deliver a high-quality community," Eckel said. "We completely understand that change is difficult and empathize with the neighbors. We have tried our best to match the density with the surrounding communities. Where there is single-family, we planned single-family; where there are townhomes, we planned townhomes."

John Kay, president of Save Echo Farms, said with nine existing communities within Echo Farms, it was hard at first to accept the loss of the golf course.

"We realized that the owners of the golf course had every right to sell the property and to develop it," Kay said Monday. "So what we decided to do was form an alliance with [the developer] Brian Eckel and his crew and the owners of the property [Matrix]. And we worked very closely with those two groups to bring about the best possible outcome for the development of each of the tracts."

The Woodlands at Echo Farms site plan for the townhome tract is expected to be discussed Feb. 11 by the city's Technical Review Committe, according to the city's project tracking website.