Major Project In The Works In Southern Brunswick County 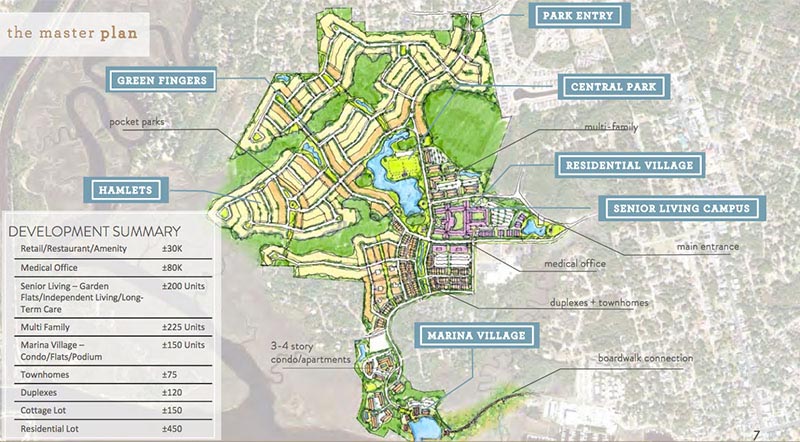 The $565 million project by Bald Head Island Limited and East West Partners, the River Place developer, would incorporate single-family homes, apartments, townhomes, duplexes and some commercial space for what would be considered amenities for the residents: medical offices, restaurants and other users.

"Our goal has been always to make it a legacy Southport community," said Chad Paul, CEO of Bald Head Island Limited, during a presentation earlier this month to the Southport Board of Aldermen. (Click here to see an overview of the project from the presentation.)

Paul said the development would be a "10- to 15-year transaction."

He said 15% of nearly 400 acres is within Southport's city limits while the rest is in extra-jurisdictional territory [ETJ] and unincorporated Brunswick County. The idea would be for the city to annex, via a voluntary annexation, the rest of the property, Paul said.

"We're not coming here to tell you how we're going to do our development we're coming here in a collaborative spirit," said Lucien Ellison, senior partner with East West Partners in Wilmington, during the presentation. "We want to have a collaborative relationship with the city of Southport and the Board of Aldermen and the city staff....to come up with something that works for everybody."

One of the specific tasks the project team also wants to accomplish is to form a relationship with Dosher Memorial Hospital in Southport, Ellison said, adding that the project might offer an opportunity to take some pressure off of the hospital.

"It's probably one of the most exciting projects" for Southport, said Mayor Joe Pat Hatem after the presentation, pointing out the ability of residents there to age in place because of the different types of housing, including senior living units, in the plan.

Hatem said Tuesday that the next step includes the project team working with the city staff and city planner Thomas Lloyd, after which the plans would eventually be part of a Southport Planning Board agenda.