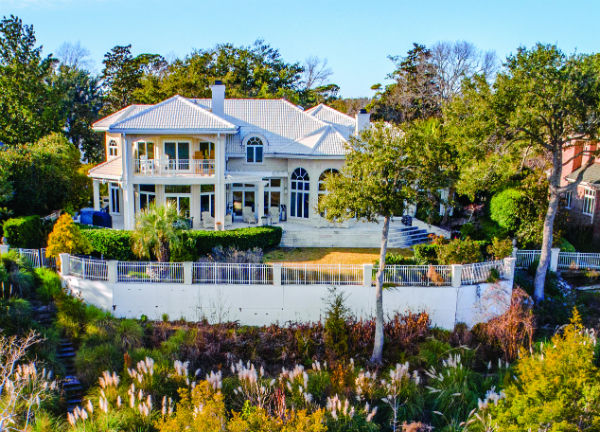 The home at 1051 Ocean Ridge Drive sold in March, one of three homes priced at $2 million or more in Landfall during that month. (Photo courtesy of Landmark Sotheby's International Realty)
Showing activity has been down about 50 percent for luxury homes in the area in the midst of the coronavirus pandemic, but there is some good news, brokers say.

"The buyers that we are seeing come into the market are very serious," said Nick Phillips, founder of and broker with Wilmington-based Landmark Sotheby's International Realty.

Despite the coronavirus, in April, Brunswick County experienced one of its best months ever for the sale of homes priced at $1 million or more. That's according to a report from Wilmington firm Just For Buyers Realty based on the N.C. Regional Multiple Listing Service.

While only two homes in the $1 million-or-more price range sold in New Hanover County in April, Brunswick had nine closings in that sector with a total value of nearly $15 million.

"The last time there were more high-end sales in Brunswick County was in May 2006 when 12 homes sold for $15.9 million," stated the report, compiled by Kathleen Baylies, broker in charge at Just For Buyers.

The last time sales were that low in New Hanover County was September 2018, the same month Hurricane Florence made landfall. That month recorded one sale for $2.1 million, the report stated.

“When there is a particularly slow month, especially in New Hanover County, it’s almost always due to a situation beyond anyone’s control,” Baylies said. “Two years ago, you had Florence. It would be tempting to say, ‘And this year you had COVID-19.’  While I have no doubt the virus was a factor, it’s perplexing that Brunswick County, the county right next door, didn’t see the same fall-off. Frankly, I don’t know how to explain that.”

The report stated that it's possible New Hanover’s lackluster April performance might be just an irregular blip.

"The number of homes that went under contract last month suggest that May’s sales numbers will be slightly behind last year's strong performance, but more in line with typical numbers for the month," according to the report.

Meanwhile, March was a really big month, Phillips said, for Landfall, an iconic Wilmington neighborhood that contains some of the highest-priced homes in the city. Three homes priced at $2 million or more in Landfall sold during March, a rarity. Phillips' firm was the listing agent for all three properties.

Will Musselwhite of Landmark Sotheby's International Realty was the listing agent for a Landfall home that sold for just under $2 million in April.

"I think that a community like Landfall is always going to maintain a strong attraction for folks because of the location and the amenities," Phillips said.

According to the Just For Buyers Realty report, the most expensive home to close in Brunswick County during April, located at 1405 West Main St. in Sunset Beach, sold for nearly $3 million and was listed by The McNeely Group of Landmark Sotheby's.

Phillips said he has high hopes for the future.