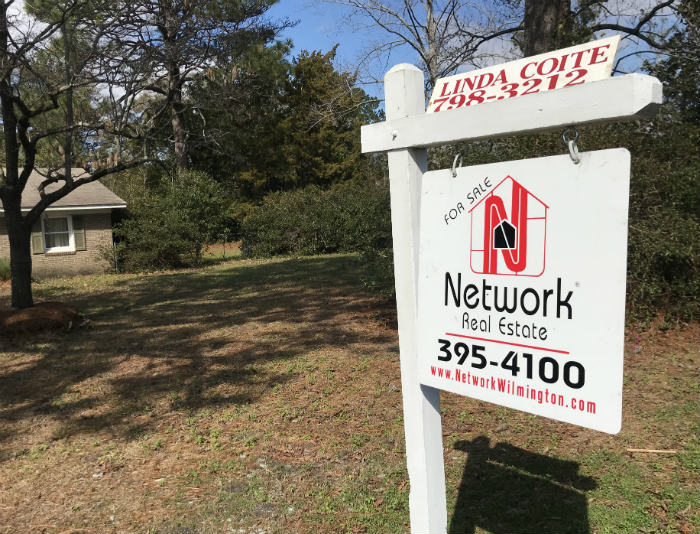 A for sale sign is posted outside a home in Wilmington's Hanover Heights neighborhood. (Photo by Cece Nunn)

Home sales hit a high note in January, with large gains throughout the tri-county region as buyers scooped up more homes, nearly 40% more, than last year, according to Cape Fear Realtors (CFR) statistics.

“We've kind of been building up to it,” explained Tony Harrington, president of CFR. “We always say that usually during the holidays we anticipate it’s going to slow down a little bit, but this year it didn't.”

It's the highest change for January since January 2006, when the statistic hit a peak of about 20%, CFR numbers showed.

In Brunswick County alone, the number of units sold rose 42%, from 241 to 343, according to the Brunswick County Association of Realtors (BCAR). The total sales volume jumped 60%, from about $67 million to nearly $100 million.

“While Brunswick County’s real estate market has been consistently strong over the past couple of years, I was caught off guard by January’s sharp increases in homes sold and sales volume,” stated BCAR CEO Cynthia Walsh in a release. “Prices are up, and homes are continuing to sell quickly as we move toward spring.”

The large jump this year for the tri-county region as a whole, 562 units sold in January 2019 to 781 last month, is not a complete surprise because of a number of factors, including an increase in listings, though inventory remains low.

Combined sales in New Hanover, Brunswick and Pender counties have been on an upward trajectory for some time, Harrington said.

“In September of last year, we saw one of the highest increases in single-family and condo and townhome sales that we’ve seen historically,” he said.

Also last month, new listings increased 18.5% over last year as properties continued to move quickly, according to the CFR report, with 1,053 listings moving from active to pending in the month.

"As home choice continues to be an issue and the rents continue to increase, there will be competition across the region, especially in the first-time buyer market,” Harrington stated in a CFR release.

"Mortgage rates have helped with affordability, but it is supply conditions that are driving price growth,” said Lawrence Yun, NAR’s chief economist.