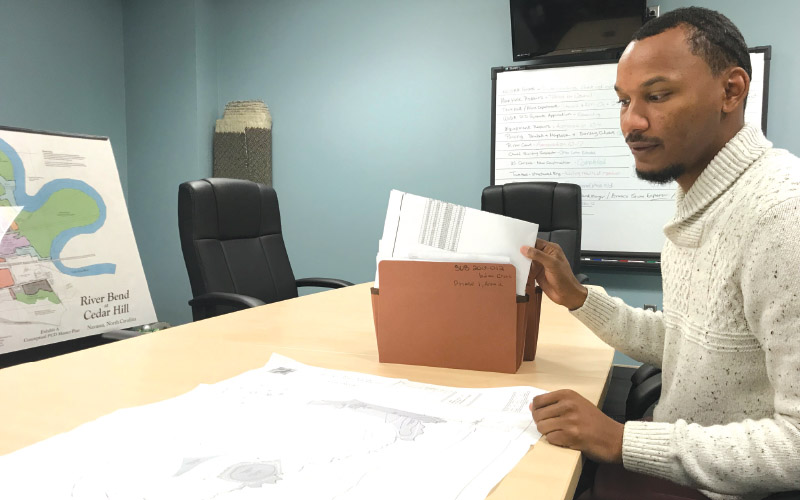 Barnes Sutton, director of planning and development for the town of Navassa, discusses plans that show the addition of homes to the northern Brunswick County community. (Photo by Cece Nunn)
About 2,100 people live in Navassa, a northern Brunswick County town that can trace its origins to the 1880s. Officials and developers expect that number to grow by the thousands over the next two decades.

Two recent actions taken by the town are signs of Navassa moving closer to that growth, with preliminary plat approval granted by town officials for at least 322 homes in one part of one development, River Bend at Cedar Hill, and 100 homes in a community expected to be called Indian Creek. Both developments are close to the Interstate 140 bypass, which opened in December 2017.

Things have progressed quite a bit over the past few years when it comes to Navassa’s anticipated growth, said Mayor Eulis Willis, adding, “I guess the No. 1 impact would’ve been I-140 coming through. That just kind of opened us up to the world because now all of the sudden we’re accessible. We’ve got all this cheap land that’s vacant within five minutes of Wilmington.”

Over time, the units would be of various types, including single family, townhomes and multifamily.

A portion of River Bend, about 120 acres, is under contract with Pickett Investments LLC for a single-family home project that would include the 322 homes, up to a potential 472. The 322 lots already have approval, said Ron Pickett, managing member of Pickett Investments LLC. He said it’s too early to say when construction might start on the houses.

Pickett agrees that I-140 is one of the major factors lending to why his company wants to develop in Navassa now, saying, “You can be at PPD [one of the area’s largest employers, located in downtown Wilmington] in nine minutes.”

“I think the bypass was kind of the trigger,” said Barnes Sutton, Navassa’s director of planning and development of more than two years. “I think a lot of people were waiting for that because it had been planned for so long. . . . the idea was always that Navassa is just kind of remote and so far away from everything. And then when the bypass opened up, it was like, ‘Oh, it’s really not that far.’”

Sutton said, “It means a lot. Good and bad. The good obviously is the tax base. And then we’ve been struggling to get any kind of commercial development going because we only have a population of about 2,100. So they always say that retail follows rooftops. And if you don’t have the population to sustain it, even with the bypass, if it doesn’t have enough traffic, you’re not going to bring in any commercial.”

But with the thousands expected to live in River Bend and Indian Creek over the next 20 years, “we’re hoping, especially since both of these are north of the bypass, they’ll have to drive either through it or on it to get to where they’re going. And that’s where we’re expecting a lot of the commercial, to spur off the interstate.”

River Bend and Indian Creek are Planned Unit Developments or PUDs, akin to mixed-use developments in other communities, including the city of Wilmington. River Bend, for example, could eventually include commercial uses in a portion of the community that might otherwise have been more residential uses without nearby commercial space, Sutton said.

“It could have easily gone for luxury condos,” Sutton said. “But we were able to work with this developer in saying, ‘Hey, we really need this, and your community would also benefit from [it].’”

As a result, a traffic analysis included a 47,000-square-foot supermarket along with other retail, office and potential manufacturing space.

Another site where more commercial uses could come to Navassa is the former Kerr-McGee Chemical Corp. site.

As officials work toward restoring some of the site and discuss its redevelopment, they also studied the economics of Navassa.

“When they did the economic study for the Kerr-McGee property, they said that Navassa has 99% [consumer] leakage. The only money that’s being spent in Navassa that’s from Navassa is to the two little auto shops that are in town,” Sutton said. “Everything else is being spent outside of the town.”

As New Hanover County runs out of developable land, Vincent said, “Naturally, the push is going to be across the river. I think this is going to open up a lot of growth opportunities for Navassa.”