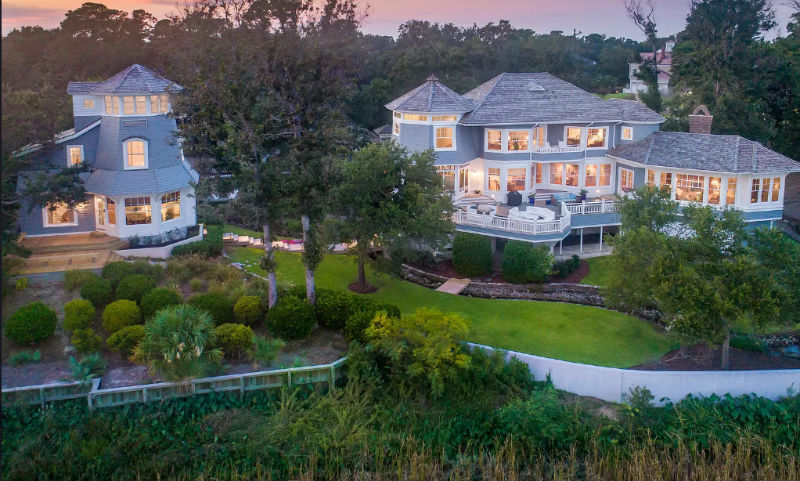 The home nicknamed "Three Bridges" in Landfall was listed in September with an asking price of nearly $4.5 million. (Photo courtesy of Intracoastal Realty Corp.)
One of the most unique luxury homes in the tri-county area went up for sale in September, according to a report released Wednesday.

The estate at 1035 Ocean Ridge Drive in Wilmington is one of 30 properties with a seven-figure asking price in New Hanover, Brunswick and Pender counties that were listed last month.

"The home is nicknamed, 'Three Bridges,' because it is made up of three structures, all connected by bridges," stated the report, compiled by Wilmington-based Just For Buyers Realty from the N.C. Regional Multiple Listing Service.

The property, listed by Vance Young of Intracoastal Realty Corp., includes a 5,000-square-foot main house with two bedrooms and a three-bedroom, three-bathroom lighthouse inspired by Nantucket. The waterfront property, shown in an Intracoastal Realty video, sits on two-and-a-half lots in Landfall.

"With an asking price of $4,475,000, it is the most expensive new listing to debut in September," the report stated.

September was an active month in the luxury housing market, according to the report.

"In addition to the new listings, another 16 homes with a combined value of $27.8 million sold during the month," the report stated. "New Hanover County led the way with 10 of those sales. Five were located in Brunswick County, and one was in Pender County."

Hurricane Florence, which made landfall near Wrightsville Beach on Sept. 14 last year, left little doubt that September 2019 would be better.

But this year's monthly sales have been outpacing last year's.

“Obviously, last September’s numbers were pretty easy to beat,” said Kathleen Baylies, broker in charge at Just For Buyers Realty, in the report. “But 2019 sales have outperformed last year for four months in a row now. Looking at the number of luxury homes that went under contract last month, it’s likely October will be the fifth month in a row that high-end homes have exceeded the same month from the previous year.”