Expert: 'There's Opportunity To Build Houses In The Right Places' 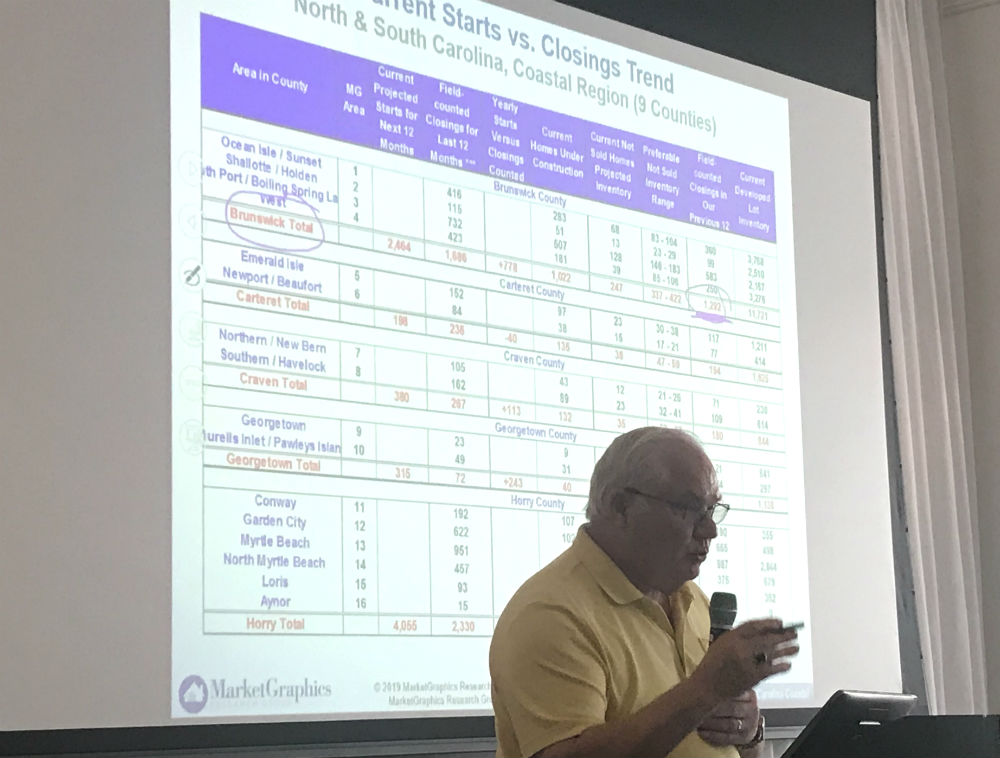 Edsel Charles, founder and chairman of the board of directors of MarketGraphics Research Group Inc., speaks Thursday during the Cape Fear Area Economic & Housing Forecast in Wilmington. (Photo by Cece Nunn)

Edsel Charles' research in September told him that only one house is expected to be for sale in the $275,000 to $325,000 price range in the Monkey Junction/Masonboro portion of New Hanover County eight months from now.

The conclusion was one of those included on his list for parts of the North Carolina and South Carolina coast titled, "Top 10 Places to Build a New Home 8 months From Now." The price point and area has a 12-month demand of 213 and a ranking of No. 4, according to the list.

Charles, founder and chairman of the board of directors for MarketGraphics Research Group Inc., shared some of his company's area research during the Cape Fear Area Economic & Housing Forecast presented by his firm Thursday afternoon in Wilmington at The Terraces on Sir Tyler.

Also speaking was Matt Martin, regional executive at the Federal Reserve Bank of Richmond. Martin is based in Charlotte and leads the bank’s outreach efforts across North Carolina and South Carolina.

A projected shortage of lots in MG’s region of research that includes New Hanover, Brunswick and Pender counties needs to be addressed, according to Charles’ report. The region includes six other counties.

The report’s insights for September this year also included:

“You have to be careful where you're going to put some stuff, but there's all kinds of places that we're short of lots,” Charles told those who attended Thursday’s event.

He added later, “There's opportunity to build houses in the right places. There's demand that is coming.”

Some of the current demand among older homebuyers is not being met, he said.

“We're not doing a good job with the retirement market and the elderly at all,” Charles said. “We're doing a really very poor job actually, and I think a lot of people that are in the elderly world are just buying what's available versus what they want because we're not putting on the ground what they want in the right place.”

Meanwhile, the economy is healthy right now in many areas, Martin said.

“The bottom line is consumers have steady job growth with some pretty steady wage gains that are supporting their spending activity,” he said of the U.S. in general. “I think for most people I don't know that the sort of big picture national and international stuff penetrates that deeply when it comes to their spending decisions.”

He said some employers are having trouble filling positions.

“There are a lot of open jobs out there,” he said.

Those industries that can afford to hold out for the best candidate are leaving some of those jobs open, Martin said, but in other areas, such as tourism and hospitality where the jobs have to be filled, the situation has, in some cases, led to higher wages.

Employee shortages are also affecting the construction industry, Martin said. That's one of the factors, along with permitting, industry insiders say, that has been leading to a lag in the building of new homes in some cases.