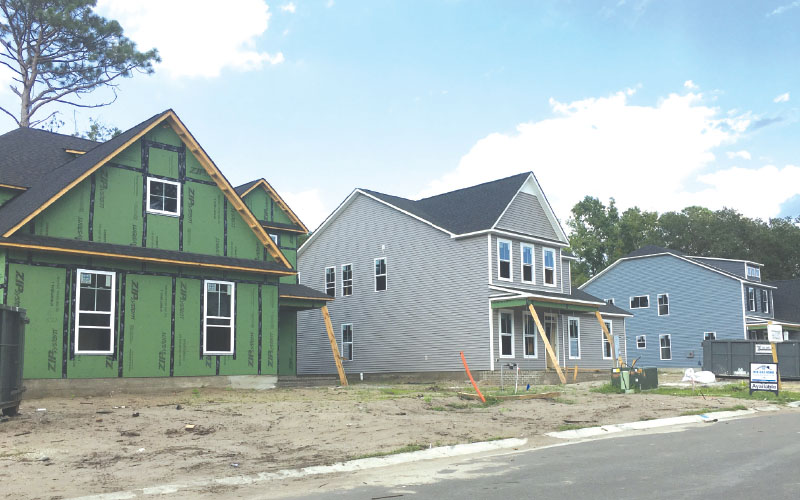 Homes are under construction at Canby Oaks, a 17-homesite community off Masonboro Sound Road in Wilmington. (Photo c/o Vicky Janowski)
Jordy Rawl and former partner Dan Weldon wanted to do something different with the 6 acres they were able to buy in a high-demand area of New Hanover County that includes proximity to the Intracoastal Waterway.

To that end, they created Masonboro Trace, which Rawl describes as an enclave of eight homesites off Masonboro Sound Road.

“We were really trying to approach the market where we’ve especially felt there was a void in that mid-price point property [mid-$400s to mid- $500s] that wasn’t your traditional new construction home, which typically consists of a slab on grade and vinyl siding and base interior finishes,” said Rawl, one of the founders of Masonboro Trace builder Coastal Home Co. “We wanted to do something that had a little bit more of an artisan-type approach and kind of let some creative juices start flowing.”

Rawl’s company isn’t the only builder in the area banking on potential buyers who are looking to live in smaller, more unique neighborhoods.

Although increased density is expected to be the trend in the future, as available, developable land becomes more scarce in Wilmington and even outside the city in New Hanover County, some builders working on smaller subdivisions and infill communities.

A commonality among some of the smaller new neighborhoods in the area is a lack of amenities. There are reasons for that, said Jenna Parker, new home specialist with Stevens Fine Homes, one of the area’s largest homebuilders and the builder for Canby Oaks, a 17-lot subdivision that is also located off Masonboro Sound Road.

“We chose to instead [of added amenities, such as a pool] to make the lots bigger and try to keep the HOA fees down,” Parker said.

The yearly homeowners association fee for Canby Oaks is $400. Although they vary from one neighborhood to the next, some HOA dues can cost hundreds of dollars per month, depending on amenities.

Meanwhile, the lots at Canby Oaks are from a quarter of an acre to almost a third of an acre.

Those sizes are “unusual, especially in that part of New Hanover County,” Parker said. “It’s a very in-demand part [of town], and we’re running short on land in New Hanover County so it’s not really the norm to find lots that are big in new-construction neighborhoods.”

Rawl shared a similar thought in the case of Masonboro Trace.

“When you get into making infrastructure improvements and extending utilities and you’re only doing it for such a light number of lots, you end up with a yield for the end consumer that’s beneficial because you’ve got larger lots and kind of an enclave community. This one in particular happens to be on a cul-de-sac,” Rawl said. “But when it comes to just the practicality of it, the expense of putting in those lower number of lots, it doesn’t really give you the ability to provide amenities.”

The higher densities, on the other hand, might give a builder less of a chance to provide craftsman construction with higher-end finishes and features, Rawl said.

Unfortunately for Masonboro Trace, he said, Rawl has not seen the “sales velocity” he originally expected.

Three spec homes have already been built in Masonboro Trace with another under construction, and one home was set to sell recently. The other three lots are available, he said.

In Canby Oaks, several homes are currently under construction.

“Our model will be done in about a month, and we’ll be on-site out there,” Parker said. “We’ve got six other spec homes that are under construction, and they’ll be done in September and October.”

The homes have finishes that are a level up from typical new construction as well, she said, including tile showers, upgraded flooring, granite, oak staircases and other higher-end features.

“This is a little bit different than what Stevens has done in the past too, but we thought looking at the buyers who are looking in that area of New Hanover County, this is what there was a big demand for, so we decided to try it,” Parker said. “There’s been a good response so far. I think it’s going to go really well.”

Another example of a smaller subdivision underway in New Hanover County is Catherine’s Cove, a 35-homesite Hagood Homes neighborhood tucked between Marsh Oaks and Bayshore in northern New Hanover.

The first five homes that were built in Catherine’s Cove are each on onethird of an acre.

“It’s not like any other community,” said Nora Ruehle, a Realtor with Coldwell Banker Sea Coast Advantage. “It’s very picturesque … it’s got character.”

That character includes a common area and a pond in the newer section of the community, along with trees that make Catherine’s Cove look well established, she said. Prices for the homes, which are 2,100-2,600 square feet and can come with or without a room over the garage, range from $376,462 to the mid-$400s.

Ruehle said the homes were designed by Troy Kenny, an award-winning designer who is also an owner, along with her husband, Jim Kenny, of Hagood Homes.

The Kennys and others “try to find these little pieces of property that people didn’t know existed,” Ruehle said. As a result, she said, Catherine’s Cove “has that real country neighborhood feel.”