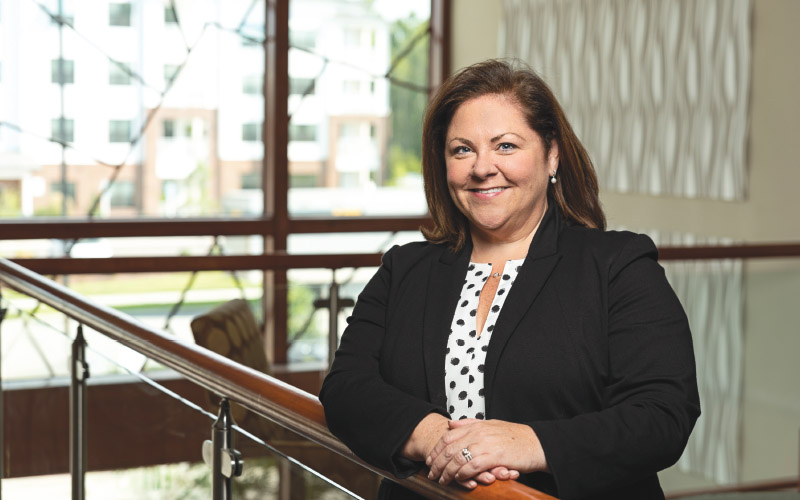 Anne Gardner, shown at the Cape Fear Realtors offices and event venue The Terraces on Sir Tyler in Wilmington, is the new CEO of Cape Fear Realtors. (Photo by Michael Cline Spencer)
The first trade group Anne Gardner worked for was the American Industrial Hygiene Association.

That might sound like a far cry from the real estate industry, but Gardner, who started her position as CEO of Wilmington-based Cape Fear Realtors in July, sees similarities.

“It was a real protectionist role, and so it gave me my first experience with what the association community could hold and the idea that we’re business professionals working together to advance a common set of goals,” she said. “Because in that instance, everyone’s combined efforts do so much more than any individual.”

Gardner came to the Realtor community in 2001, she said. This year, the George Mason University graduate joined CFR after nine years as CEO of the Charlottesville Area Association of Realtors, the largest trade organization in Central Virginia.

Cape Fear Realtors, with more than 2,800 members, is one of the largest trade associations in New Hanover County and the third-largest Realtors association in North Carolina.

With the announcement of Gardner’s hiring in May, and before that the selection of Daniel Jones as the new CEO of the N.C. Regional Multiple Listing Service, Cape Fear Realtors emerged from a time of uncertainty.

That time started last year, when CFR and the Brunswick County Association of Realtors submitted letters of intent to withdraw from the N.C. Regional MLS, according to the Dec. 10 CFR newsletter. In January, then-CEO Taylor Oldroyd was “released” from his leadership role by CFR’s executive committee.

CFR officials have never stated specifically why the group wanted a different manager, except to say that the CFR leadership felt the decision was “in the best interest of the association.”

Jones was hired in March, succeeding Doris Nurenberg, the former N.C. Regional MLS CEO, who left in December. Jones had served as the chief information officer for Cape Fear Realtors.

“I see Daniel’s presence as one that is really unifying and calming to that group because he is a true database person,” Gardner said. “He knows the technology; he knows the challenges.”

“We’re going to be working to advance our Realtors’ role in the community because they are builders of community,” Gardner said.

“We do that in partnership with other allies, in the homebuilding industry, in the supportive services that go into creating a local robust economy whenever there is the sale of a home and creation of a new home unit,” she said.

Gardner said CFR also has the role of working with the public, “as far as making sure that they understand that we are their primary resource and advocate for the right to purchase, own, enjoy the property that we all come to love as part of the American dream.”

Gardner said many of the elements in the CFR board’s 2019-2020 work plan “will focus on preparing our members to address the issues of technology, communication [and] all the challenges that they’re having with how quickly their business is changing … We have to help them innovate and work within the framework that all of the consumers expect.”

Realtors are also dealing with barriers to homeownership, including affordability gaps, Gardner said.

“We work in concert with the state and national [Realtors] association because we’re a federated organization,” Gardner said. “So we work diligently to always make sure that we’re aware of issues which may impact homeownership, which may impact development rights and opportunities.”

According to CFR statistics, pulled from the N.C. Regional MLS, 70% of the home sales that take place in the area covering New Hanover, Brunswick and Pender counties involve homes under $300,000. But houses in the price points leading up to $300,000 are not in great supply.

CFR will continue producing a report that was first distributed this year called The Affordability Gap. The report was launched at the CFR Housing Affordability Summit in January, and will be an annual report, Gardner said.

As the affordable housing discussion continues, CFR also keeps an eye on regulations, which can increase the cost of housing, officials say. Gardner points to Densay Sengsoulavong, CFR’s government affairs director, as an example of how the organization accomplishes that task.

To sum up her plans for CFR, Gardner said, “We’ve got some big external goals, but internally as far as a staff team and how we support the work of the almost 3,000 members in this region, [the goal] is to try and make their business experience seamless, to be their No. 1 business advocate because as they’re busy working 10-, sometimes 15-hour days working for their customers and clients, we’re their advocate.”