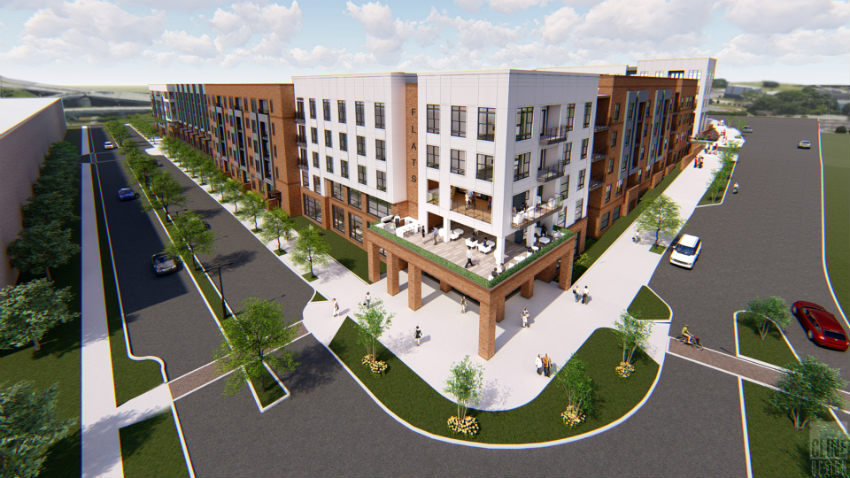 A rendering shows The Flats on Front, a 300-unit luxury apartment community that is expected to be built at 111 Cowan St. in downtown Wilmington. (Rendering courtesy of DPJ Residential)
Planned luxury apartments in downtown Wilmington across from the city's upcoming Northern Waterfront Park aim to capture continuing demand for urban living, one of the project’s developers said Thursday.

D. Porter Jones of Charlotte-based DPJ Residential said The Flats on Front will capitalize on downtown’s growth and the latest trends apartment renters want. The project is under development by Flyway Residential, a joint venture partnership between DPJ Residential and Chaucer Creek Capital.

"Our first development in Wilmington was Mayfaire Flats, a 240-unit apartment community located across the street from Mayfaire Town Center. That project has been very successful for us, and we hope to replicate some of this success at The Flats on Front," Jones said. "We believe downtown Wilmington is in the early stages of a major resurgence that many other cities in the Southeast have been experiencing over the last decade. We believe Wilmington is on the cusp of this revitalization, and we want to get in while it's in this growth mode."

The Flats on Front, an estimated $35 million project, will feature 300 residential units on nearly 6 acres at 111 Cowan St., adjacent to Sawmill Point Apartments. Rents will vary depending on size, view, floor and other features, but starting rents will be $1,200 for a one-bedroom unit and $1,600 for a two-bedroom unit, Jones said.

"Our units will feature quartz countertops, stainless steel appliances and plank flooring," he said. "Although Sawmill Point is a very nice and successful project, our community will offer a more contemporary living experience while also bringing in a cool and fresh coastal vibe."

Jones said the amenities planned include a dog park and dog washing station, a saltwater, resort-style pool, a two-story clubhouse with an elevated terrace with river views, a two-story fitness center and a 330-space parking deck and 104 surfa 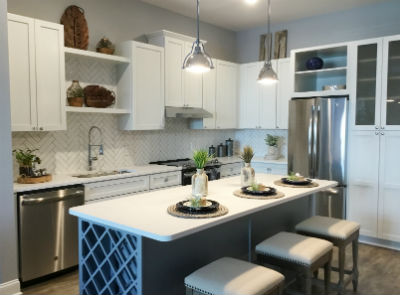 The developers believe the complex will particularly appeal to the area's ongoing influx of incoming residents.

"Wilmington is seeing a tremendous amount of population growth, especially folks from the Northeast who have lived in urban, dense environments where walkability and access to amenities such as restaurants and shopping is key," Jones said. "We believe our residents will park their cars Friday after work and not need to get back in them until Monday."

A select number of the 300 units in The Flats on Front will be two-story townhome units, with the living room, dining area and kitchen on the first floor and two bedrooms and two bathrooms on the upper floors. The whole complex will be four- to five-stories tall.

Additionally, Jones said, "the way we are positioning our building, we plan to maximize the number of units that have unobstructed river views."

The city’s upcoming park project across the street from The Flats on Front site was a major draw for the developers.

“The new North Waterfront Park is really going to be a game changer in our mind. Other cities in the Southeast have invested, like Wilmington, in downtown parks, and it's been hugely successful,” Jones said. “For example, there's Romare Bearden Park in Charlotte that the city invested in right in uptown, which is our downtown, and it's been a huge success and has really spurred development around.” 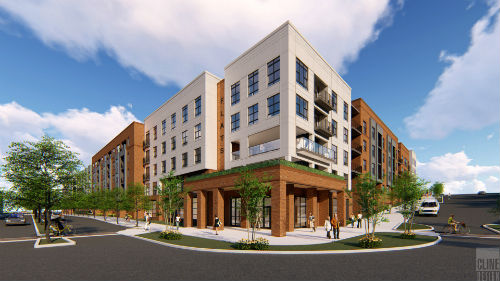 Construction on the park is expected to start in late 2018. Jones said the goal of the developers of The Flats on Front is to start building the apartments the first quarter of next year.

“Between where we are and the heart of downtown, some of that area really needs to fill in with more commercial and retail, but we think over time that will happen,” he said. “The rooftops are what the retail and commercial folks look for. ... You need to get more people living downtown, and then as that happens, the grocery store may come, more office buildings may come, and you get more of a true 24/7-type experience.”

Pictured above an example of what The Flats on Front apartment kitchens will look like and a street-level view rendering of the apartment community. (Courtesy of DPJ Residential)