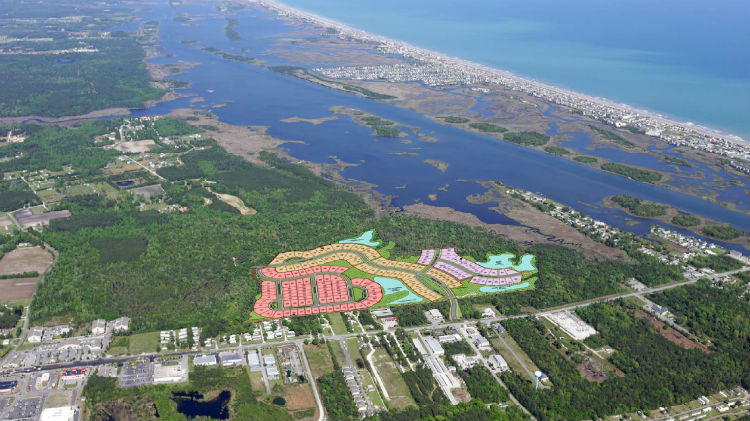 Trez Forman Capital Group, a lender, announced Wednesday that Trez Forman recently closed on a $2.5 million loan for the site at the intersection of J.H. Batts Road and Roland Avenue in Surf City. The property has been approved as a Planned Unit Development (PUD) with zoning that allows up to 3,200 single-family homes and multifamily units, the lender said in a news release.

The development, dubbed Waterside in previous plans, will likely start with single-family homes. The borrower and buyer of the property, Surf City Properties LLC based in Daphne, Alabama, purchased the land in a nearly $7 million deal and plans to sell the first 170 lots to D.R. Horton, a national homebuilder with a growing Coastal Carolinas Division that includes the Wilmington area.

"We think it's a great piece of property and we're going to develop part of it now for single-family residences and we're looking at potentially developing the rest," said Marion Uter, principal with Surf City Properties LLC.

Uter said he thinks Surf City "has a lot of potential. We like the whole coastline there. We're involved in projects throughout the southeast and just like that area."

Uter's group is new to the Wilmington region but not to North Carolina.

"We closed on property in Hillsborough called Collins Ridge and we're starting development there," Uter said, "And we're looking at several more to close in the next few months in the Raleigh area."

“We are excited to complete these transactions in North Carolina neighborhoods that are ripe for new development,” Brett Forman said in the Trez Forman announcement. “We continue to target similar opportunities and are well-positioned to accommodate the demand from developer borrowers.”

Correction: The 195 acres in Surf City was purchased in a nearly $7 million deal, according to the buyer. A previous version of this story stated an incorrect sale price.