By Cece Nunn and Christina Haley O'Neal, posted May 7, 2018
Tweet 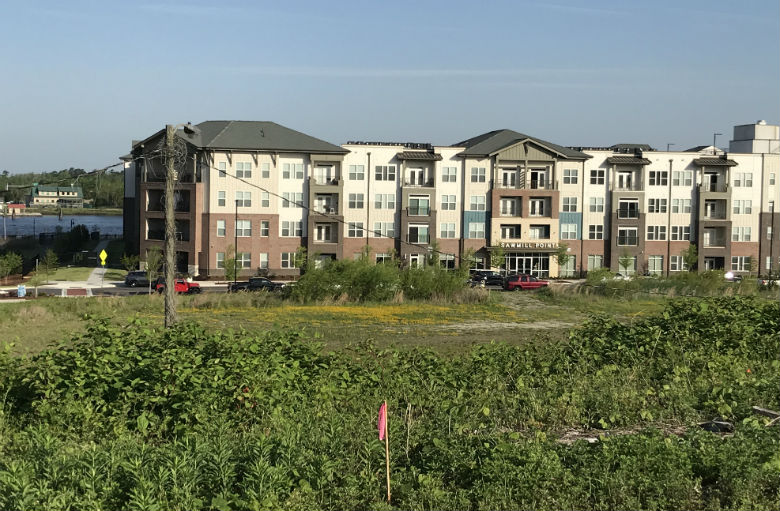 The property in front of Sawmill Point Apartments could be used for new apartments for downtown Wilmington, according to a brownfields program application for the site. (Photo by Cece Nunn)
Land in front of the Sawmill Point Apartments in downtown Wilmington is under contract and could be developed into another apartment project, according to state documents.

Prospective developers have submitted a brownfields property application to the state of North Carolina brownfields program describing a potential multi-family residential project for the 5-acre site at 111 Cowan St. The estimated capital investment for the project would be $35 million, according to the application.

Charlotte-based DPJ Residential developed the Mayfaire Flats apartments off Sir Tyler Drive. McClatchey is president of Chaucer Creek Capital in Raleigh, according to the company's website, a real estate investment firm that also lists Mayfaire Flats as one of its assets.

Efforts to reach McClatchey and Jones were not immediately successful Monday. Flyway Residential LLC is listed as the buyer of the property, and the four parcels that make up the site are under contract by the potential buyer, according to the application.

The current land owner is Paragon Financial Investors LLC, which purchased the 111 Cowan St. property for $3.9 million in 2012, according to New Hanover County property tax records.

The brownfields program application states that the property was vacant from 1898 to 1973, used for warehouse and trailer storage from 1975 to 1993 and warehouse or vacant buildings from 1998 to 2014. Buildings were demolished there in 2016.

As of May 1, the Cowan Street apartments project was one of four potential brownfields projects pending eligibility through the state program. The others are a potential mixed-use project at 615 N. Front St.; changes to Hanover Center off Independence Boulevard and Oleander Drive; and Ezzell Trucking at 233 Sutton Lake Road, according to state records.