Kerr Station Lofts on South Kerr Avenue will include 139 apartments, 19 townhomes and 5,000 square feet of retail and office space. (Rendering courtesy of Weddle Real Estate Investments)
A redevelopment project expected to replace a shopping center on South Kerr Avenue got the green light from city officials Tuesday after its developers added townhomes to the plan.

Kerr Station Lofts, which would replace Kerr Station Village on South Kerr Avenue, will include 139 apartments and 19 townhomes, with the townhomes facing Jacksonville Street and Franklin Avenue to serve as a buffer (shown in rendering below) between the new project and existing single-family homes, according to the latest plans. The plans also call for 5,000 square feet of retail and office space.

The Wilmington City Council voted Tuesday night to approve the rezoning and special use permit needed for the project.

"They did a good job by charging us to go back and work with the city staff," said Andrew Weddle of Kerr Station Lofts development firm Weddle Real Estate Investments (WREI). "The city staff, the mayor, the council and the city planning staff really did help us design a better community. It didn't feel exactly great when we had to go back to the drawing board in January, but it really did come together nicely ... I would say that we're very pleased with the results with the combined effort of us and the city staff."

When he said "go back to the drawing board in January," Weddle was referring to the Jan. 9 meeting when the city council voted to continue public hearings for the Kerr Station Lofts rezoning and special use permit requests until its first March meeting. The earlier plan included 154 apartments along with the retail and office space but no townhomes.

"What happens now when you drive down Franklin or Jacksonville [Street], the parking and the [apartment] buildings will be behind these two-story townhomes, which will be right on the street," Weddle said. 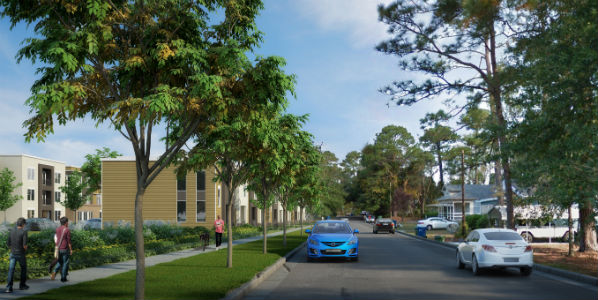 Weddle said he anticipates breaking ground on the redevelopment project in late fall or winter of next year in hopes of completing the development in time for the 2020 school year. While the apartments and townhomes are aimed at providing housing for students, they are also open to other renters.

Steve Hall, a partner in Wilmington-based commercial real estate firm Maus, Warwick, Matthews & Co., conducted the property assemblage, which is under contract, for the Kerr Station Lofts site and is the listing agent for the retail and office space.

Hall said the project will "help revitalize" the Kerr Avenue corridor up to Market Street.

"Now you're going to have 400-plus residents that can walk to the neighboring retail centers," Hall said. "We will begin here shortly seeking tenants for that 5,000 square feet, probably more geared towards servicing the tenants of the Kerr Station Lofts and other apartments nearby."