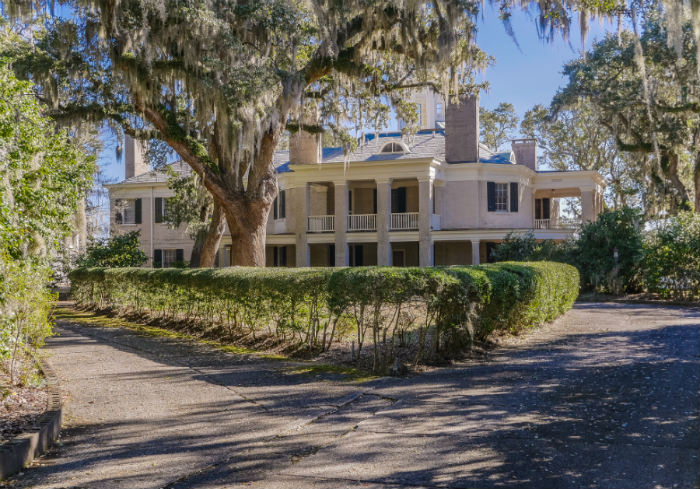 Designed by Lincoln Memorial architect Henry Bacon, the home at 7521 Masonboro Sound Road in Wilmington sold this week for $4.9 million. (Photo courtesy of Landmark Sotheby's International Realty)
A Wilmington property that includes a mansion designed by Lincoln Memorial architect Henry Bacon has sold for $4.9 million, a real estate firm announced Friday, in a deal hailed as the highest-priced residential sale in New Hanover County in more than 10 years.

The property, called Live Oaks and also referred to as the Parsley Estate after the original family that owned it, holds a neoclassical Southern mansion on 7 acres along the Intracoastal Waterway at 7521 Masonboro Sound Road.

"Built in 1913, Live Oaks was a summer playground for the rich and famous of the early 20th century, hosting the likes of the Vanderbilts and Astors as frequent visitors," stated an announcement from Landmark Sotheby's International Realty.

David Benford, broker in charge of the Wilmington office of Landmark Sotheby's International Realty, represented the buyer, Oak Forest Properties LLC, and the sellers, Hormoze and Suzanne Goudarzi, in the transaction.

Benford said Friday that the home had been on the market for about a year. In addition to being part of one of the largest deals in the county in more than a decade, Benford said, Live Oaks is "also one of the most unique properties with one of the best views."

The only higher-priced New Hanover County sale of a strictly residential property took place in March 2005 and was the $5.25 million sale of the home at 49 Pipers Neck Road on Figure Eight Island, said Kathleen Baylies, broker in charge of Just For Buyers Realty, based on a search of the N.C. Regional Multiple Listing Service.

When the Goudarzis bought the Live Oaks property, for $4.25 million in 2015, according to New Hanover County property tax records, they did so with the aim of keeping it from being subdivided and redeveloped, Benford said. It was not their primary residence.

The buyer is keeping Live Oaks as one house on one property, he said.

"They're pleased that they attained their goal," Benford said of the Goudarzis.

Henry Bacon, who "spent much of his youth in Wilmington," according to the North Carolina Architects & Builders biographical dictionary, also designed the Donald MacRae House, which is now the parish house for St. James Episcopal Church on Third Street in downtown Wilmington.