RiverLights, New Homes Throughout Region Showcased During Parade Of Homes 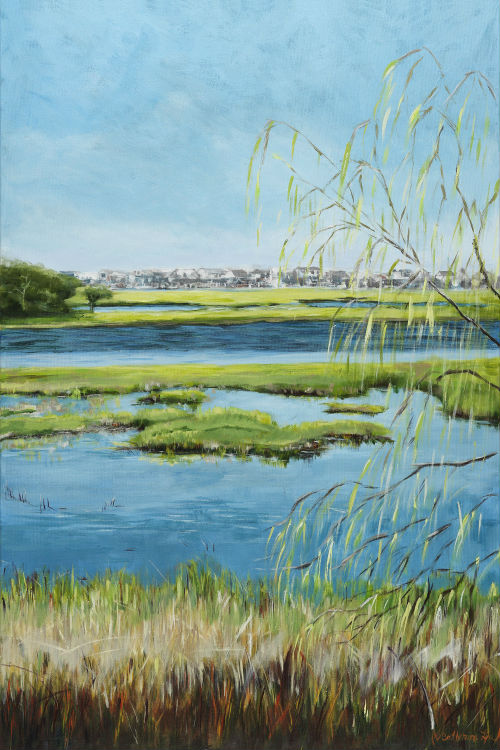 This painting by Catherine Lea, a broker with Coldwell Banker Sea Coast Advantage, has been selected as the featured Plan Book cover art for the 31st Annual Parade of Homes. (Courtesy of Coldwell Banker Sea Coast Advantage)
RiverLights, a master-planned community under development on the Cape Fear River in Wilmington, was selected as this year's Showcase Community Partner for the Wilmington-Cape Fear Home Builders Association's 31st annual Parade of Homes.

When complete, RiverLights is expected to hold nearly 2,300 homes, as well as businesses, on 1,400 acres along River Road. Nine homes in the community will be available to tour during the Parade of Homes, which is a free, self-guided tour that runs noon to 5 p.m. for two weekends - this Saturday and Sunday and April 29-30. Including those in RiverLights, the parade showcases 84 new homes in New Hanover, Pender and Brunswick counties.

"The parade is such a great annual event, and it really provides a great way for us to connect with folks out there in the community, prospects and buyers and just people who have a general interest in what we're doing," said Jim Henry, vice president of development of RiverLights developer Newland Communities. "We're huge supporters and really excited about it."

Outside of the homes, guests will also be able to explore the Cape Fear River waterfront community amenities at RiverLights, including boardwalks, multiple parks, hammocks in The Live Oak Commons and businesses at the adjacent Marina Village.

Dave Spetrino, president of Plantation Building Corp., which is building custom homes and townhomes in RiverLights, said Newland is raising the bar for future developments in the region because of its national presence and experience.

"We’re getting a new standard in land planning and development, and that’s one of the things I'm enjoying the most as a professional in the business," Spetrino said. "Future projects are going to be benchmarked against RiverLights, and that's good for the people who live here."

The overall theme of this year's Parade of Homes is "River to the Sea," and the event ends the day before the Wells Fargo Championship golf tournament begins at Eagle Point Golf Club on May 1.

“The timing is impeccable as it provides us a true means to highlight the [Wilmington-Cape Fear Home Builders] Association’s many developers, builders, subcontractors, and businesses that provide that true economic stimulus to our local economy,” said Deans Hackney, president of the WCFHBA, in a news release.