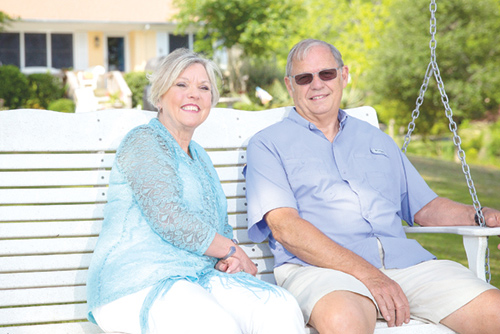 Jennifer and Bill Tatum are including tickets to the 2017 Wells Fargo Championship in the rental of their cottage on Pages Creek next May 1-7. (Photo by Chris Brehmer)

Visitors often rent the waterfront cottage belonging to Jennifer and Bill Tatum to fish in Pages Creek, sail through the Wilmington area’s waterways or enjoy the sun and sand at Wrightsville Beach.

Next May, reserving the three-bedroom cottage during the first week of the month will also come with tickets to attend the 2017 Wells Fargo Championship at Eagle Point Golf Club. The Tatums made the decision to do so on the advice of their son, a Wilmington resident.

But they’ve also seen firsthand the impact of major golf events on a community and surrounding areas.

“Living in Sanford, we’re 30 minutes from Pinehurst. I have one group of friends that built a home for the express purpose of renting to golf fans of the U.S. Open,” Bill Tatum said. “We thought it was a good idea to publicize this and also go ahead and buy the [Wells Fargo] tickets so that we’ve got tickets included.”

An influx of visitors

The 2017 Wells Fargo Championship is expected to bring in thousands of visitors and millions of dollars to Wilmington’s economy May 1-7 next year, including money spent on accommodations for golfers and their families, caddies, staff members and spectators.

“Some might want to stay at the beach, others want to stay close to the course, so we try to get a variety,” Hougham said.

Some might also want to rent a home instead of staying in a hotel. Hougham said the championship is trying to set up “a clearing house” situation in which players, staff members and others who are part of presenting the tournament would have one number to call for those types of reservations.

“One thing Wilmington has that we don’t have in Charlotte is there’s a lot of rental homes, so I’m sure players will be taking advantage of those,” he said.

Hougham said the championship organizers are not involved in finding accommodations for spectators, many of whom could turn to websites like VRBO.com or airbnb.com.

At this year’s championship, held in Charlotte, 185,000 people attended, Hougham said. The event’s organizers hope that between 22,000 and 25,000 will attend the championship in Wilmington each day next year.

In some neighborhoods in New Hanover County, homeowners
associations have rules about short-term rentals.

“We normally don’t allow short-term rentals of less than six months. That’s been our policy, but particularly for the tournament, the board enacted an amendment last year that would allow residents to apply to allow short-term rentals … We just want to manage it, and we want to know who’s coming in and manage the traffic and things like that,” said Stan Weinrich, a resident of Porters Neck Plantation who was president of his neighborhood’s HOA last year.

While the subject hasn’t come up at recent county meetings, Wilmington officials are considering the possibility of changing the way short-term rentals are defined and regulated within city limits, a decision that could potentially have an impact on options for the Wells Fargo Championship next year and other events that attract a lot of out-of-town visitors.

Rachel de Faut, owner of Sea River Realty, works mainly with properties in downtown Wilmington, including long-term and short-term rentals and sales. She said her weeklong rentals are already completely booked for a triathlon that will be held in Wilmington in October, the PPD Ironman North Carolina Beach 2 Battleship. She said she might welcome some additional regulation by the city if it more clearly defines what’s allowed without halting short-term rentals altogether. So far, she has not had any inquiries about the Wells Fargo golf event from potential renters, she said.

Mike Harrington, president and owner of Topsail Realty Vacations, said his company is starting to look at marketing opportunities and the best approach to attract golf fans who need lodgings during the event.

“We’re going to put some campaigns together around that because the pricing will be better” on Topsail Island, Harrington said. “We’ve got to show how close we are to the
actual venue. You can probably get there [to Eagle Point] just as quickly from Topsail as you can if you’re staying in downtown Wilmington.”

As the owner of a company in Topsail, Harrington doesn’t have any business interests that would be affected by potential Wilmington short-term rental rule changes. But as president of the N.C. Vacation Rental Managers Association and a Wilmington resident, he said, “I think it’s in Wilmington’s best interests to come up with a more progressive way to handle this than just to follow suit” with the types of policies cities such as Asheville and San
Francisco have adopted in response to house-sharing sites.

He said confining short-term
rentals to commercial portions of a city is “a way to ban it without saying it’s banned.”

“I’m not saying we don’t need any regulation, but I think we have to all be kind of fair about it on both sides,” Harrington said.

Currently, there is no specific definition of “short-term rental” in the city’s Land Development Code. The city’s staff has been applying the LDC’s definitions for “housing unit” and “family” instead, resulting in a policy that the required rental period for any portion or all of a house must be seven days and that short-term rentals be limited to no more than three unrelated people, including the primary tenant of a home.

City attorney Bill Wolack said in a meeting in May that in his opinion, the city cannot completely do away with short-term rentals but can
“zone them into particular districts.”

Planning officials have recommended that Wilmington create a clearer definition for short-term rentals and formulate a process to register, permit and track those rentals.

As of press deadline, the city had not scheduled another meeting to talk about the issue.

Wilmington planner Christine Hughes said the subject of the Wells Fargo Championship next year in relation to the short-term rental issue has not come up from elected officials, although city staff members did note in a benchmark city report that Annapolis, Maryland, regulates short-term rentals but also exempts short-term rentals from registration requirements for specific uses, including highly attended events held in the city such as the U.S. Naval Academy’s graduation.

In Wilmington, next year’s Wells Fargo Championship has the potential for a wide impact, Harrington said.

“We think it’s a great opportunity for the whole region, not just Wilmington,” he said, “but the whole coastal region down here.”