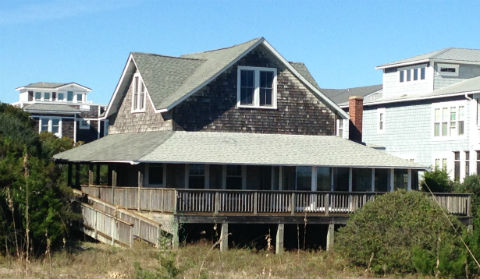 Investors bought 217 S. Lumina Ave. in Wrightsville Beach for nearly $3.5 million in October. (Photo by Cece Nunn)
At least nine homes priced at more than $1 million each sold during the month of October in the Wilmington area, according to a recent luxury home market report.

Also last month, three homes with seven-figure prices went under contract, and 15 new residential properties in the same category came on the market, the report said.

Property at 217 S. Lumina Ave. in Wrightsville Beach, which includes a six-bedroom, 3,333-square-foot house, sold to MBT Development LLC for about $3.5 million on Oct. 13, making the sale the highest-priced residential transaction of the month, according to the Just For Buyers market report. It previously belonged to the Bluethenthal family.

"This property is an oceanfront double lot with a home dating to 1899. The investment group that owns the property is willing to sell it with the current home or sell the lots separately or raze the original home and build four new duplex-style condos," the report said. "The asking price for the home on the double lot is $4.9 million, making it the most expensive home to come on the market in October. The multi-story luxury condos are priced between $2.5 and $3.4 million dollars."

Sitting on 3 acres, 6226 Richard Bradley Drive in the Bradley Hills neighborhood in Wilmington, sold after six days on the market, the luxury report said. The asking price was nearly $1.9 million.

An intracoastal waterfront home at 6808 Towles Road had been on the market for more than 15 months and had an asking price of more than $1.7 million, according to the report.

The third property to go under contract in October is a nearly 9,000-square-foot estate at 110 Skystasail Drive in Shandy Point, a 1920s home with an asking price of $1.5 million.

"The final contract prices on each of these properties will not be made public until the sale closes and the deed is recorded with the county registrar," the report said.

The housing market in general continues to thrive in the Wilmington area, according to statistics released this week, with the number of homes sold in October hitting its highest level in 10 years.

The Wilmington Regional Association of Realtors database of MLS numbers show that buyers purchased 637 homes in October, 75 more than the same period last year and the largest number for the month of October since 2005, when 685 single-family units sold.

The average sale price rose a small percentage to $257,201 last month, while the median price fell close to 5 percent, dropping from $207,200 in October 2014 to $197,500 last month, according to WRAR's multiple listing service data, which covers New Hanover, Pender and northern Brunswick counties. The total dollar amount from sales increased by nearly $20 million in October this year compared to the same month last year.