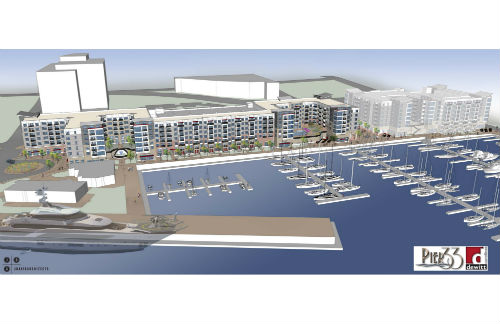 Plans call for the six-story, $50 million development called Pier 33 to include 300 luxury apartment units overlooking the Cape Fear River. (Contributed rendering)
A Triangle-based developer wants to construct a $50 million, riverside apartment development in downtown Wilmington, adding to a multitude of unit counts being proposed in the area.

Raleigh-based Dewitt Carolinas Inc. announced Wednesday that it's proposing to build a six-story, luxury apartment community on a 5-acre site in the Northern Riverfront Marina and Hotel development currently under construction along the banks of the Cape Fear River, according to a news release.

The site is currently under contract, said Chuck Schoninger, president and CEO of Wilmignton-based USA InvestCo -- the firm that currently owns the property.

Development officials would like to begin construction on the project, which is designed by Raleigh-based JDavis Architects, in the fall, with an estimated 16-month completion timeline.

Officials plan to submit the project to the city’s development services division Thursday.

Called Pier 33 apartments, the proposed 300 residential units would incorporate a mix of studio, one-, two- and three-bedroom units over roughly 32,000 square feet of ground-floor retail space, the news release stated. The proposed project also would include 10 townhome units on the ground floor, each with private entries from the Riverwalk and mezzanine-style lofts.

The development would play host to a number of resident amenities including a raised saltwater swimming pool, heated indoor lap pool, conference room, dog washing station and yoga room, the news release stated. There also would be a parking garage with 700 parking spaces for residential and retail use.

Officials overseeing the apartment development said the project is designed around “revitalizing the stunning views of the historic Pier 33 Marina, bringing a live, work, play renewal to one of Wilmington’s most notable Riverwalk locations,” according to the news release.

“We are excited about the opportunity to bring life back to the pier along the new extension of the Riverwalk,”  Todd Saieed, president and CEO of Dewitt Carolinas, said in the release. “This project, known as Pier 33, will allow us a wonderful opportunity to provide a new style of living to downtown Wilmington. Our team looks forward to continuing to advance Wilmington’s well deserved revitalization.”

And there could be more.

Chuck Schoninger, president and CEO of Wilmington-based USA InvestCo, said Wednesday that Dewitt Carolinas also has an option to purchase an additional 2 acres in the development.

The site is located near the intersection of Nutt and Hanover streets by the Wilmington Convention Center.

Schoninger said his firm was excited about working with Dewitt officials to make the project a reality.

"We took a lot of time vetting companies that would be a great partner," Schoninger said. "Todd and his group at Dewitt were hands down the most talented group out there. We feel more of a partnership with them than a purchaser of our asset."

"It cleary accelerates the growth and development within the local economy and downtown," Wolverton said. "[The development] is identifying and seizing on local and national trends for housing demand in downtown, urban settings. It's very exciting."