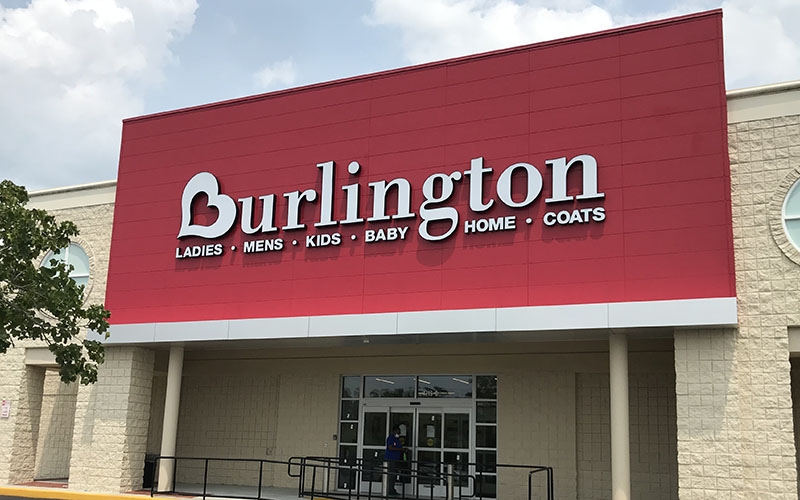 Burlington Stores is set to open a Wilmington location off New Centre Drive. (Photo by Cece Nunn)
While national chains have faced bankruptcies and closed stores for the past couple of years, some parts of the Wilmington area are attracting more retail space and tenants.

More than 8,000 stores in the United States closed last year, and experts predict 10,000 could close in 2021, according to a Business Insider article.

Locally, although spaces emptied in some shopping areas throughout the region last year, other retailers are calling Wilmington home.

“I think the local retail market has been resilient,” said developer Dean Scarafoni of Live Oak Development Co. “One reason is the number of new people moving into the area, many of whom are looking to start or relocate businesses.”

“Port City Java has just signed the first formal lease commitment for The Crossroads at Independence. Several other tenants are in the lease negotiation phase,” Scarafoni said. “The center will open in 2022; the exact date has yet to be determined due to delays in steel shipment.”

The Crossroads project in southern Brunswick County is located at the intersection of U.S. 17 and Calabash Road. It includes an existing CVS pharmacy, three outparcels fronting on U.S. 17, two outparcels on Calabash Road, as well as “highly visible interior acreage well suited for anchor retail, office, and hospitality development,” according to the Live Oak Development Co.’s website.

Scarafoni said a Dunkin’ Donuts franchisee recently purchased a 1-acre parcel in The Crossroads at Carolina Shores. The Dunkin’ Donuts is expected to open in 2022, and will be the second business in the commercial development, joining CVS, he said.

Elsewhere in Wilmington, Burlington Stores is scheduled on Aug. 20 to open a location in Wilmington at 4715-D New Centre Drive in a commercial center anchored by Target.

“We are excited about our continued store growth and look forward to bringing more great values to area residents on apparel for the entire family and home,” she said in an email. “In addition, the store opening will provide new job opportunities to the community.”

The official grand opening date will be released shortly, DiTolla said in late July. Burlington is occupying space that previously held an OfficeMax.

Restaurants are often considered part of the hospitality sector rather than retail, but they have an impact on each other.

When it comes to the health of the retail market, “one thing to watch is how quickly restaurants will come back,” Scarafoni said. “In recent years they have been driving retail, but labor and supply chain issues have slowed their return post pandemic. Staffing in particular, has been a problem. Retail won’t fully recover without a vibrant restaurant sector.”

That sector has been growing at Independence Mall, where two new restaurants were being added to the lineup of eateries in front of the mall.

Aye! Toro features regional Mexican cuisine made with locally sourced ingredients. The 4,000-square-foot restaurant was set to have indoor and outdoor dining at 3540 Oleander Drive, next to Jersey Mike’s, according to a Greater Wilmington Business Journal article in July. An early August opening was expected, the article stated.

Under construction next to First Watch at 3532 Oleander Drive is Masa Sushi, a new restaurant led by Jun Li of Nikki’s Gourmet & Sushi Bar at the mall’s food court.

New retailers, including T-Mobile, have also recently come to Independence Mall. And despite numerous empty spaces at Mayfaire Town Center, the shopping destination on Military Cutoff Road has been welcoming some new tenants.

A different Apple service and resale store in the Military Cutoff Road area, CityMac, closed its location last year at The Forum.

Simply Mac bills itself as “the largest Apple Premier Partner in the U.S.” and, as of a June 23 news release on the opening of a store in Winston-Salem, has at least 47 retail stores in 16 states. It’s an authorized reseller of all Apple products and provider of warranty repair service by Apple-certified technicians.

Also coming to Mayfaire, Coniglio said, is Buff City Soap, a handmade soap store that offers products “free of harsh ingredients and full of nourishing plant-based goodies,” according to its website.

The store is expected to open around the Christmas holidays at 1039 International Drive in the space next to First Watch, a breakfast, brunch and lunch restaurant.

Another temporary occupant is Art in Bloom Gallery, which is hosting a pop-up exhibit featuring art by Elizabeth Darrow and friends through Aug. 28 at 820 Town Center Drive, unit 120.

In another potential retail addition, developers based in Cary want to build a mixed-use project with apartments and commercial space in Wilmington, on South College Road property that previously held a Honda dealership.

The proposal calls for 298 apartments and 15,000 square feet of commercial space that could contain retail, food and/or beverage businesses, on about 6 acres, a rezoning application stated. The project, dubbed Paseo, would involve 821 and 825 S. College Road and 4881 and 4885 Wilshire Blvd., according to the application.

In the developers’ zoning application, they said the property “is located on a major thoroughfare and primary retail corridor, College Road, in an area that is ideally positioned for redevelopment and growth.”