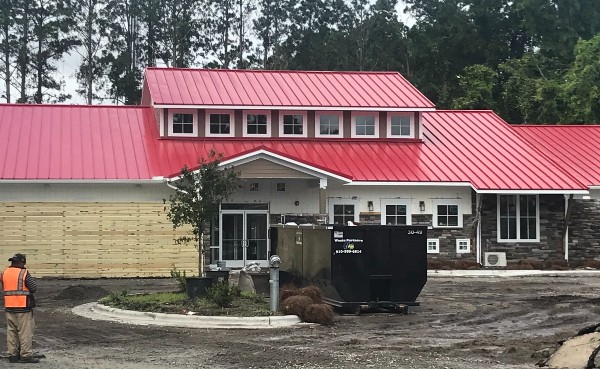 Construction is nearly complete on a pet boarding and grooming facility in midtown Wilmington, and the company involved has grown again with a purchase in Pender County that will house its corporate office.

The firm, Pawville Inc., will soon open Midtown Pawville at 3532 Carolina Beach Road, where crews on Friday were putting the finishing touches on the property anchored by a new 10,500-square-foot building.

“The reason it’s such a large facility is we're trying to offer a lot of things under one roof, so we're very optimistic about its success," said Phil Miller, who founded Pawville with his wife, Amanda Miller. We’re also very optimistic because we love this market. We see so much growth happening in this area.”

Midtown Pawville will also use the building formerly occupied by Bone & Bean BBQ in front of the larger facility.

Phil Miller said the former Bone & Bean building will be renovated, made to look like the larger Midtown Pawville facility, and will be expanded from about 2,500 square feet to 3,000. The structure will hold Midtown Pawville’s doggy daycare program.

In addition to dog and cat boarding, grooming and daycare services, he said, Midtown Pawville will offer training, self-serve wash and a dog treat bakery.

Pawville has retained “the existing team of employees and intends to make the ownership transition process as seamless as possible for all clients. As such, business will continue uninterrupted throughout the transition and upcoming remodel process,” Phil Miller said in an email.

Porters Neck Pawville is only a few miles away from the new Scotts Hill facility, he said. The Porters Neck location will remain open over the next year, but most of its operations will slowly transition to Scotts Hill Pawville.

“It's not optimal to have a Pawville facility in a shopping center, and we acquired Porters Neck with the intent to move its operations to a larger facility over time,” Phil Miller said.

Pawville started in Homosassa, Florida, and now has seven locations. In addition to Homosassa, midtown Wilmington, Porters Neck and Scotts Hill, the other Pawville spots are Jacksonville, Sneads Ferry and Surf City.

"We also have a piece of property under contract in Clayton," Phil Miller said. "We’ve more or less covered this area, and we're looking toward the Raleigh market next."