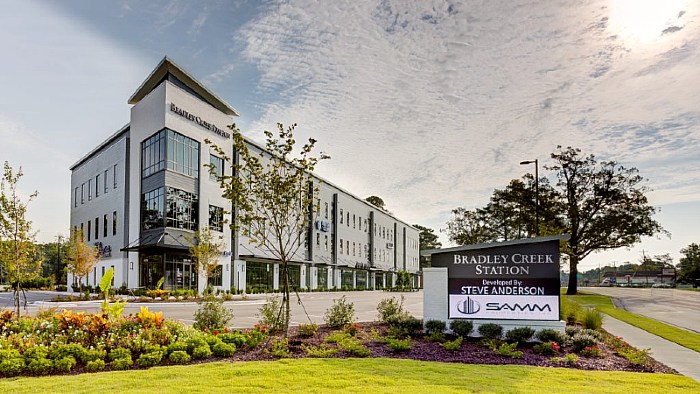 When upfits are complete on the remaining units, Bradley Creek Station will hold 17 companies. The latest to join the development is the New Hanover County branch of Farm Bureau Insurance, which leased 7,655 square feet.

"We've outgrown it over the years and it's time to move on to a bigger place that we can expand into," Graham said of the agency's 3,500 square feet at The Offices at Mayfaire.

The agency also has an office at Hanover Center off Independence Boulevard.

Graham said the mix of businesses at Bradley Creek Station was a draw for Farm Bureau. Other occupants of the complex include Angel Oak Home Loans, RE/MAX Executive, First Carolina Bank, Head to Toe Day Spa & Salon, Crabby Chic and Big Sky Design, among others.

He said the agency plans to move into its new space by Nov. 1.

Developer Steve Anderson of SAMM Properties, who also developed The Offices at Mayfaire, said activity at the complex "significantly increased starting in February and March to where today we are 100%. At this point, I literally wish we had another entire floor, we've had that much activity."

"Low interest rates are driving so much of this," Steve Anderson said.

SAMM Properties has an office at the complex that is expected to open in July.

The units of occupants that have not yet moved in and opened could be complete by the end of this year or the beginning of next year.

"Within the next six months, we should be fully open and we'll look forward to a big announcement and grand opening at that point," Steve Anderson said.