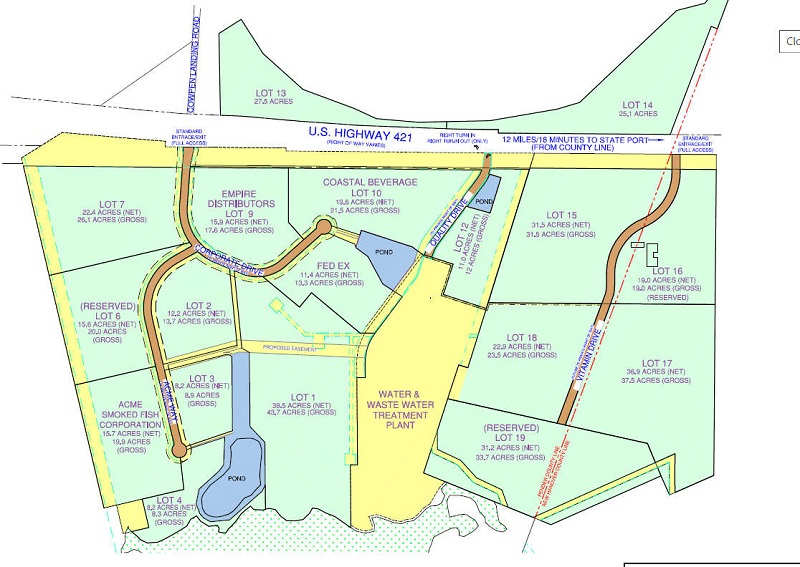 Ramm Capital Partners has lot 6 of the Pender Commerce Park under contract, said Chris Ramm, manager of the firm, on Wednesday.

The news comes following the end of the upset bidding period Monday for the 20-acre site in the county-owned industrial park. That period is now over, and planning for the project is in motion, including land surveys and designs for the site and building, Ramm said.

"Plans are to close on the property in the first quarter of 2021," he said. "We would like to break ground as soon as feasibly possible, so we can deliver a shell building by the fourth quarter of 2021."

The purchase price for the lot, which is owned by Pender County, is $811,200, according to county documents.

The total price tag for the project depends on the final size of the building, which is estimated to be roughly 180,000 square feet, Ramm said.

Officials with Wilmington Business Development (WBD) welcome the continued investment by Chris Ramm and his partners in the Pender Commerce Park, said WBD CEO Scott Satterfield in a news release.

“There was a time when industrial inventory was a weakness for our region, but thanks to the vision of developers like Chris that is changing," Satterfield said in the release. "Demand for and now availability of ready-to-go industrial space has energized our recruitment of major employers to Greater Wilmington.”

The investment puts Pender County and WBD "in a better position to recruit additional industrial employers to the region," stated the release.

WBD is a private, nonprofit economic development organization that serves business and industrial retention and recruitment efforts in Wilmington and New Hanover and Pender counties.

The development team for the next spec building has been selected and is being led by Winston-Salem-based Landmark Builders, which was the general contractor for Ramm's first build, Ramm said.

“We are very excited to continue investing in Southeastern North Carolina,” said Ramm in the release. Ramm is also the COO of Taylor Development Group, which is another development partner on the lot 2 project, and now lot 6, according to the release.

“There is significant interest in our initial project thanks to Cape Fear Commercial and Wilmington Business Development. We want to leverage this momentum into our next project on Lot 6 in Pender Commerce Park," Ramm added.

The speculative buildings, both the construction that's about to be finished and the second in planning for the industrial park, can accommodate a single user or multiple tenants.

“Chris Ramm’s investment on both projects is timely – the region will have attractive, available industrial space just as U.S. industry looks to re-shape supply chains and tailor their expansion strategies for the post-pandemic economy,” Satterfield said.

That type of availability is an asset for the regional market.

“The industrial market in Greater Wilmington is as strong as I’ve ever seen it,” said Paul Loukas, broker in charge at Cape Fear Commercial, in the release.

Loukas and Will Leonard, also of Cape Fear Commerical, are brokering the first spec building and will continue that brokerage relationship with Ramm on lot 6, stated the release.

Loukas said there is a 5% to 6% vacancy rate once the former Vertex building on Raleigh Street in Wilmington, now being marketed as the Wilmington Business Park site, is taken out of the mix.

“We are seeing a large amount of interest from tenants in the 30,000- to 60,000-square-foot range, as well as much larger users. WBD has done a fantastic job assisting us in generating several of our larger prospects,” Leonard said in the release. “Being able to potentially house both puts us in a prime position to attract industry.”

Pender County leaders have touted the industrial park as a boon for the county and the entire region, with the potential to attract a variety of companies. Over the years, Pender Commerce Park has garnered Acme Smoked Fish; Empire Distributors; FedEx Freight and Coastal Beverage Co.

Adding to that tenant list are the upcoming investments by Ramm and his partners, as well as the planned North American headquarters of India-based hose manufacturer Polyhose Inc., which is anticipated to invest nearly $8 million and hire 51 workers.

“This latest investment by Chris Ramm and his partners keeps the momentum going and enhances the park as a regional economic engine,” George Brown, chairman of the Pender County Board of Commissioners, said in the release.

"All of us are looking forward to our next Wilmington project and sharing more details in the near future," Ramm said.