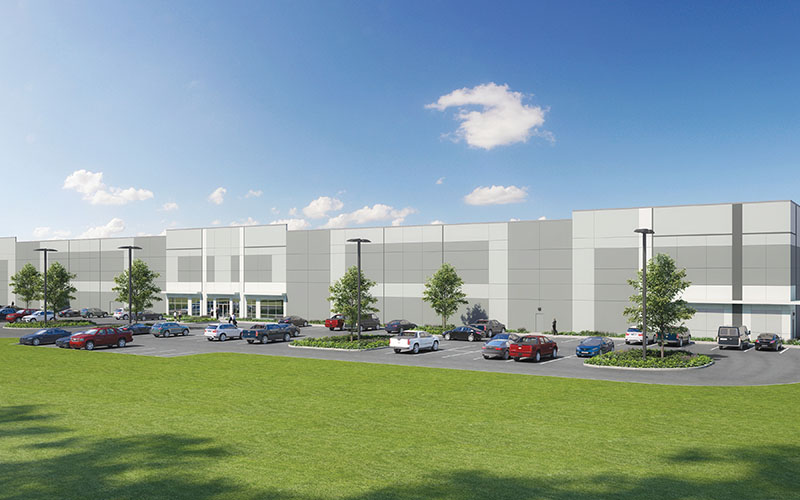 A rendering shows the anticipated look of a speculative building under construction at Pender Commerce Park.
Industrial commercial real estate gained more attention over the past few months as a sector that’s still doing well, despite an economic downturn caused by measures to slow the spread of the novel corona­virus.

“It’s thriving – both before, during and likely after the pandemic,” said Mark Johnson, executive vice president/sales manager at Wilm­ington-based commercial real estate firm Coldwell Banker Commercial Sun Coast Partners. “Every forecast I’m privy to has been hugely opti­mistic about continued growth as the world has shifted in several ways in recent months.”

Online ordering serves as a major example, he said, as it “was already growing at a fast pace and is accel­erating both because people already comfortable with online ordering are doing more of it, combined with new users – in particular the older gener­ation that was basically forced to try it out, and are liking it.”

Pender County, Johnson said, has some designated industrial parks “that we should all watch carefully.”
That includes Pender Commerce Park.

Two firms purchased land in Pend­er Commerce Park recently with the expectation of adding to the number of businesses in the county-owned industrial park.

Separate, planned developments – a more than $8 million Class A industrial spec building and the U.S. headquarters site for Polyhose Inc. – were approved by Pender County officials.

Polyhose Inc. plans to build a 40,000-square-foot facility in the park for its North American head­quarters, expecting to create 51 jobs.

Pender Commerce Park was completed as part of a partnership between Pender County and eco­nomic development agency Wilming­ton Business Development (WBD) in 2011.

“More often than not clients de­sire speed to market – that is offered at the Pender Commerce Park not just in terms of fully infrastruc­tured site availability but now with a best-class industrial spec building on the way,” stated Scott Satterfield, CEO of WBD, in an email. “Taylor Development/Chris Ramm’s project [the spec building] is a welcome addi­tion to the park. Concrete has been poured for the building.

“This makes it real for clients that are attracted to Greater Wilmington and need a facility of scale to be operational as soon as Q3 2020,” Satterfield said in the email. “We continue to market this building in concert with our real estate and economic development partners.”

Adjacent to the speculative building will be India-based Polyhose, a manufacturer of industrial hoses, “which is also scheduled to break ground in 2020. Polyhose’s North America Headquarters represents our first foreign direct investment in the park and we are confident their presence will grow tremendously in the region,” Satterfield said.

He said those additions bring the approximate total in the Pender Commerce Park to more than 600 projected jobs, more than 550,000 square feet under roof and well over $100 million in capital expenditure investment.

Wilmington-based Cape Fear Commercial is the real estate firm marketing the 126,000-square-foot spec building. The developer will own the property and lease the building.

Will Leonard, one of the Cape Fear Commercial listing agents for the building along with CFC broker in charge Paul Loukas, said industrial real estate was busy in March and “it’s still the busiest I’ve seen it in my 20-year career.”

As in every real estate sector, the industrial segment experienced a bit of a pause in the weeks when stay-athome orders were first put in place, Leonard said.

“But I haven’t really seen a slowdown; even the new inquiries are pretty strong, and every transaction but one that I was working on prior to this is still proceeding as planned,” he said.

And that one, Leonard said, wasn’t scared off by the pandemic but rather found a different property in the market.

As for Pender Commerce Park, Leonard said, “I think Pender County’s done a fantastic job. I think they had a brilliant idea when they acquired that piece of land years ago, and WBD has done a great job of supporting them and pushing that park.”

He said the park’s attributes lend themselves to success.

“They built a park in a logistically accessible area, meaning in close proximity to [Interstate] 140, which has been huge for the industrial market in general,” Leonard said. “There’s all utilities available there; there’s a common stormwater system, which saves time, money and permitting. That’s money you don’t have to spend on land just to dig a pond in the middle of it.”

Additionally, Leonard said, “Their land prices have been super attractive to attract those types of companies that are there.”

He said he thinks Pender Commerce Park will continue to grow.

“The walls aren’t even standing yet, and we’ve got several proposals out on that [spec] building,” Leonard said. “We also have the capability that if a user’s need doesn’t specifically fit that building, we have the potential to offer build-to-suit” and other existing space in the park.

So what’s next for the local industrial market?

“Industrial activity/interest in our region has actually remained strong throughout these unprecedented times. From a project perspective we see opportunities in warehouse/distribution, e-commerce, pharma and manufacturing,” Satterfield said.

“In the mid- to long-term we continue to position our counties for the potential of onshoring in the wake of COVID-19,” he added. “There is an even more concerted effort on product development – of which the Pender Commerce Park is a prime example – ensuring we have the available industrial buildings of scale and infrastructure-rich sites ready to go for potential investors in the region.”

U.S. 421 between New Hanover and Pender “is going to be the next horizon of industrial development.”

In Brunswick, he said, “I’m working on two potential transactions over 30 acres apiece in Leland Industrial Park, which has been rebranded to Leland Innovation Park.”