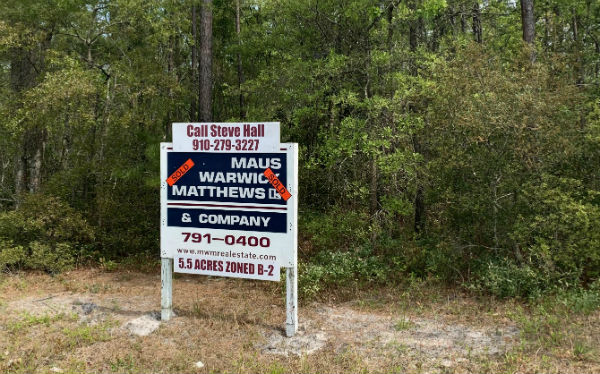 Developers known for creating high-profile office space throughout Wilmington bought back property in the Porters Neck area on Tuesday.

The buyer, SAMM Properties, sees the potential for development at the site, as it did when it used to own it more than 15 years ago.

“We are in the process of doing our market research for this area and being it is already zoned B-2, it already allows all of the uses that SAMM Properties is accustomed to developing,” said Parker Anderson, developer with SAMM Properties.

The company, led by Parker Anderson’s father, Steve Anderson, has developed numerous projects around Wilmington, especially in the Bradley Creek/Mayfaire area, including all six of The Offices at Mayfaire.

A SAMM Properties entity last owned the Market Street site in 2007, when it was part of a larger tract.

“When we previously owned this site, we also had Howe Creek Landing to develop, which was another 5.5-acre site in the middle of Mayfaire,” Parker Anderson said. “At the time, we believed this site was premature to develop and there was an opportunity to sell it to another group, knowing there would be other opportunities in this corridor in the years to come.”

Since then, northern New Hanover County has experienced significant growth.

“That pattern is continuing, especially when you look at the growing number of residential projects in this area,” Parker Anderson said. “As things have continued to expand toward the Porters Neck and Scotts Hill area, we knew this was an area SAMM Properties wanted to be and the opportunity presented itself when this 5.5 acre site that we previously owned became available.”

Wilmington Health at one time had plans to use the property for an expansion in the Porters Neck area, where it already has a facility, but the plan changed, said Steve Hall, partner in Maus, Warwick, Matthews & Co. Hall represented Wilmington Health in the transaction.

Asked about a potential timeline for the property's development, Parker Anderson said, "Our development of this site will be market-driven as all our developments are. Due to SAMM Properties not being commercial spec developers, we will allow the market to dictate when and what will be developed at this site."