Update: A New Life For A Wrightsville Ave. Strip Center 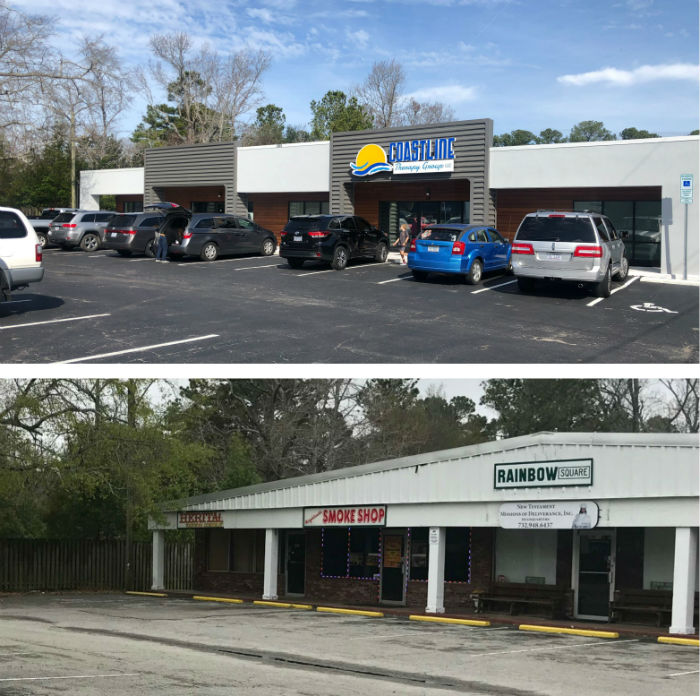 A transformed Rainbow Square (at top) was previously (before picture shown below) in need of some major renovations. (Photo by Suzi Drake/File)

A transformation has come over the Rainbow.

Rainbow Square, a small strip center built in 1974 at 3901 Wrightsville Ave. in Wilmington, was gutted and revamped, and now has a new facade and a new tenant.

Coastline Therapy Group offers occupational, speech and physical therapy in one portion of the center, while another is for lease.

Before its transformation, the property was in need of a lot of attention, including being brought up to code, said listing agent Steve Hall, partner with Maus, Warwick, Matthews & Co. Plans for the changes were submitted last year by owner Tribute Companies.

The rear of the property is going to be used for the clubhouse and leasing office for student housing complex Elevation Apartments, also owned by Tribute, Hall said.

In the commercial center, “We have 3,200 square feet left that will be great for an office or light retail user, which could be subdivided into two, 1,600-square-feet sections if need be.”

Hall said more changes could be coming to the surrounding area as some of the older properties continue to be redone and updated.

“On Wrightsville Avenue in that little corridor, I think things are starting to turn a little bit. I think the improvements will progress the closer you get to Independence Boulevard and the Covil Avenue intersection,” Hall said. “As you ride down there, you’ll start seeing some really cool changes.”