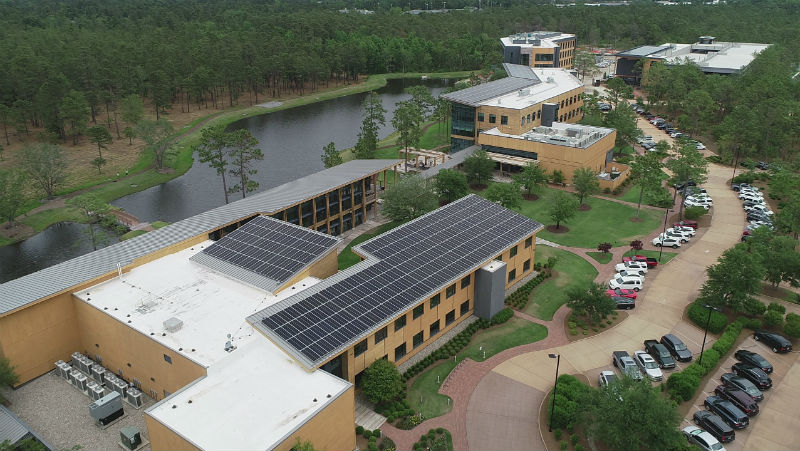 The solar installation at Live Oak Bank's campus in Wilmington is a finalist for the Economic & Community Enhancement Award as part of the Cape Fear CREW's second annual recognition program. (Photo courtesy of Cape Fear CREW)

“We received a remarkable number of excellent submissions this year for our second annual Awards of Excellence,” said Elise Rocks, CREW member and chairwoman of the selection committee. “The judges were very impressed with the innovation and commitment to excellence of the companies that are shaping the future of our quickly growing region.

"We congratulate all of them and look forward to announcing the winners on Feb. 27.”

The event will be held at 11 a.m. Feb. 27 at the Wilmington Convention Center and will be open to the public.

DEALMAKER AWARD
(Below are descriptions from nomination materials)

To shape the character of the town and create a downtown business district, Leland officials enacted form-based zoning code standards in 2011, and, in 2013, rezoned an area identified as the Gateway District to a Flexcode zoning district.

The Gateway District Infill Plan was later adopted establishing a vision for an urban, mixed-use residential and business district along the Village Road corridor and surrounding neighborhoods.

One of three "catalyst sites" identified in the Gateway Plan was 20 acres located north of Village Road and bounded by Lee Drive to the west and Fairview Road to the east. It was previously occupied by a mobile home park and an ad hoc flea market. In the Gateway District Infill Plan, town officials envisioned commercial uses along Village Road and a mixed-use retail village on the remaining portion of the site.

The town anticipated that the proper development of this site, along with the planned extension of Baldwin Drive, would generate future economic development, increase property values, provide jobs and improve traffic flow in the Gateway District.

As a result, Harrington Village and Harrington Square comprise a $50 million mixed-use project built on the site.

Pacon Manufacturing, currently headquartered in Somerset, New Jersey, was looking to relocate its manufacturing and headquarters to the southeast region of the U.S. because of high business costs, weather and standard of living. Compared to other coastal towns in the southeast, Pacon determined the Wilmington area provided the greatest value based on the combined business, educational, cultural and lifestyle amenities.

Dr. Justine Reel, the University of North Carolina Wilmington's College of Health & Human Services, who is organizing a women's leadership program to promote diversity and inclusion among rising leaders across UNCW

Additionally, the Cape Fear Board of Directors has named the winners of the individual achievement awards: