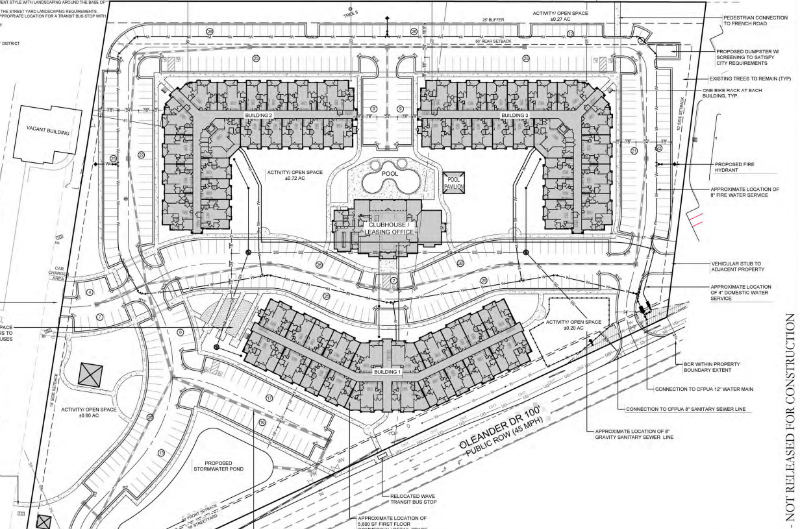 A site plans show the three buildings that will sit on Oleander Drive, in part on property where there used to be a Carmike movie theater.
As we travel down Oleander Drive in Wilmington, sometimes multiple times a day, we wonder: What, if anything, will ever happen to that old movie theater building that's just been sitting there with no popcorn, no movies, nothing, for more than a decade?

The answer seems to be forthcoming. Apartment developers purchased the property, 5335 Oleander Drive, and the adjacent land recently for more than $5 million, according to property tax records. Site plans submitted to the city in May call the project, "Oleander Commons."

The old Carmike Cinema property's price was $3.5 million, sold by Oleander Investments (Wilmington-based development firm Swain & Associates), while the land at 5429 Oleander Drive sold for $1.6 million by Neil Realty Co., according to deeds. The buyer was Hawthorne at Oleander Apartments LLC.

Site plans that are still under review by city of Wilmington officials, according to the city's project tracking website, show three large structure surrounding a pool and club house. The buildings include 223 apartments -- 86 one-bedroom units, 113 two-bedroom units and 24 three-bedroom units.

The project includes 5,600 square feet of commercial space that could either be for retail or office users, the site plans show.

Efforts to reach someone with Hawthorne to find out more information about the project were not immediately successful Tuesday.

Some benefits, according to proponents: A multifamily component can replace the residential units that were eliminated overtime on Oleander Drive as that corridor became more commercial, according to applicant comments in a previous District Rezoning application.

According to the application, the project will enhance "an unsightly" portion of Oleander and include investments that will revitalize the area and make it friendlier for pedestrians.