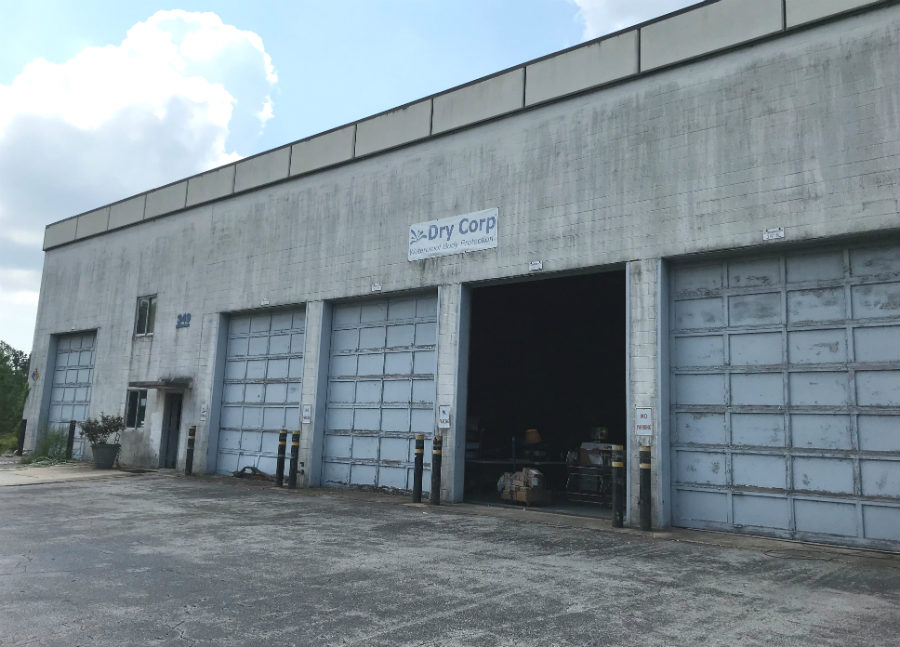 DryCorp is moving this week out of 349 Military Cutoff Road (shown above) and into 4300 Deer Creek Lane. (Photo by Cece Nunn)

Tenants have been moving out of the industrial building at 349 Military Cutoff Road as a result of The Avenue, an upcoming, more than $200 million mixed-use development.

DryCorp, a company that distributes two product lines, DRYPro and DryCASE out of Wilmington, is moving from 349 Military Cutoff Road to 4300 Deer Creek Lane, off North Kerr Avenue, in about half of the building also occupied by the property’s owner, Highland Roofing Co.

The address DryCorp is vacating, which will be demolished to make way for The Avenue, was a great location, said Corey Heim, COO of DryCorp.

Heim explained that the new address was flooded by Hurricane Florence in September 2018.

“So the landlord in that spot basically said they’d be able to rebuild based a little bit on what our needs were. That’s been really great,” he said. “It was a pretty tight timeline for when we had to move in and the sort of renovation they had to do. But it looks like it’s all worked out.”

DryCorp is expected to be operational in its new space, about 4,000 square feet, this week, Heim said. Its DRYPro line is made up of waterproof body protection, while DryCASE  manufactures waterproof outdoor gear.

As for The Avenue, which is set to be anchored by a Westin hotel and include apartments, offices and high-end exclusive retailers and restaurants, construction has not yet started, but the project is moving along.

“We are looking to start asbestos abatement immediately following the tenants, including DryCorp, moving out,” said Roy Carroll, owner of The Avenue development firm The Carroll Companies, in an email Monday. “Actual demolition will occur around the end of the year.”

He also said, “DryCorp has been an excellent tenant and I wish we had another property we could have moved them.”

The building DryCorp is leaving is a little more than 10,000 square feet. In addition to DryCorp, the tenants included Front Line Freediving, a dive shop focused on freediving, spearfishing and scuba diving, according to the company's Facebook page.

“The rumors are true! Front Line is leaving the Wilmington, NC area at the end of August and relocating to Aguadilla, Puerto Rico,” a Facebook post stated. “While the online store will continue to operate our brick and mortar store will be reopening in the winter of 2019. What does this mean for you? We will continue to maintain our online store and continue shipping worldwide.”