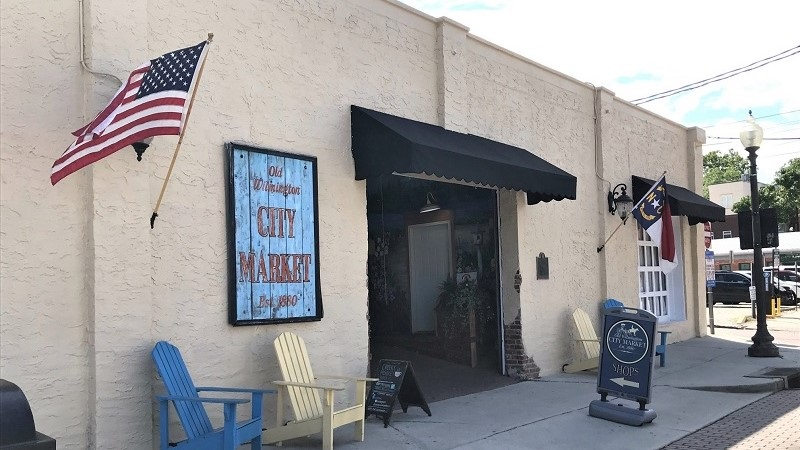 A historical building in downtown Wilmington has been listed for sale.

Old Wilmington City Market, located on South Front Street in downtown Wilmington, has been placed on the market for $1.8 million, according to the property listing on the N.C. Commercial Multiple Listing Service.

The building is in downtown Wilmington’s Central Business District and has been a retail hub for more than a century. The structure was originally built in 1879, according to Old Wilmington City Market's website.

The property is being sold by City Market of Wilmington LLC, said Nest Realty broker Eric Knight, one of the listing agents along with another Nest broker Ashley Whitley.

“The City Market is still operating as is. The present owner has a fantastic group of tenants so they are planning on staying in place. It's not going to affect the day-to-day business for them or their retail clientele," Whitley said.

The tenants lease annually and are not all on the same schedule, Knight said.

Right now, the retail space is nearly full, Knight said, adding "there is one space out of 17 that is unoccupied."

But the property is listed as being versatile with the potential for different uses.

“For whatever potential next user, there is the option to keep it as is ... there is room to bring rents more to market rate. And the annual leases, that gives you time to maintain some type of repositioning on it,"  Knight said.

According to the listing agents, the property, at 124 S. Front St. can also be sold with a 0.17 acre riverfront building lot at 122 S. Water St.

“The property offers three potential options for purchasers. Someone could purchase just the city market or they have the option to just purchase the waterfront lot. Preferably, the sellers would like to sell it as a package deal where they get the building and the waterfront lot,” Whitley said.

The riverfront property is listed at $800,000. The total project package is $2.6 million, Whitley said.

The 14,700-square-foot Old Wilmington City Market building is being touted as a potential investment property, for a wide range of uses.

On top of keeping the property's use as a retail center, Whitley said there have been a variety of other interests, including use as a boutique hotel, waterfront restaurant or a wedding venue.

"I've had a few interested parties in the greater event and entertainment industry. Another one is a capital group, and they would keep it as is and maybe reposition it to maximize the income on it," Knight said. "I have another restauranteur who is looking at the lot."

Interest has been high since Nest Realty listed the property in June, Knight said.

“I am thrilled with the amount of early interest we have gotten. Not only these direct prospects, but the amount of exposure and views from our various marketing outlets has been really good," Knight said.

Nest Realty has been growing and increasing its footprint in the commercial real estate space.

“For us, [the property] is very unique," Knight said. "We with Nest and our brokerage, we have doubled down on trying to expand our footing in the commercial marketplace, and this definitely rings a marquee entry into it."