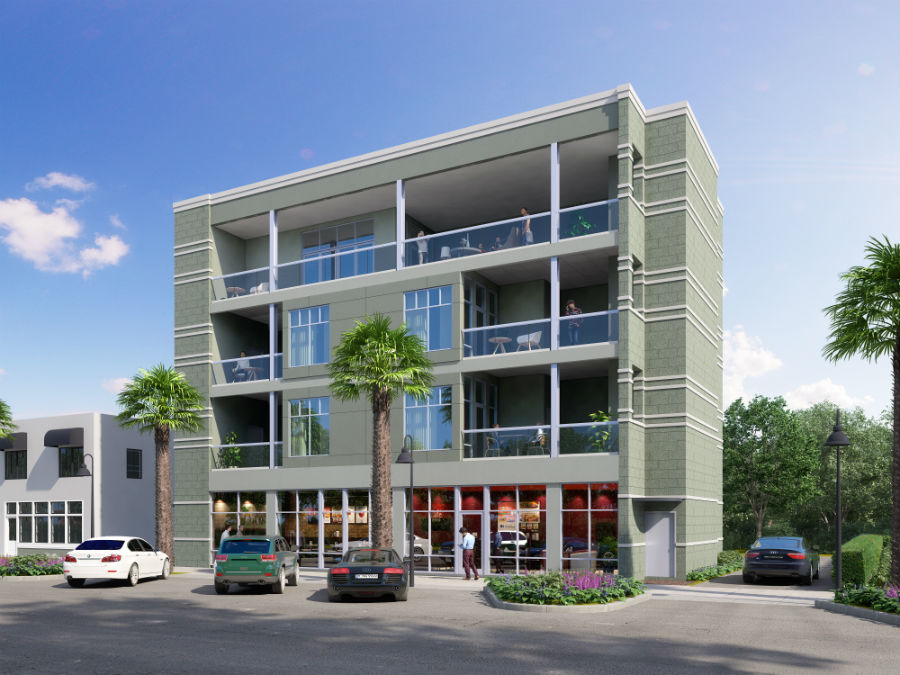 A rendering shows The Cove, which in addition to townhome-style dwellings and a penthouse will also include 1,300 square feet of ground-floor cafe space. (Rendering courtesy of Justin Donaton/Coldwell Banker Sea Coast Advantage)

In the sprint toward tourist season, new businesses and homes have arrived or are coming to Carolina Beach and the town’s boardwalk.

Three retail units created out of the former bumper car track at 11 Pavilion Ave. on the Carolina Beach Boardwalk have been leased, according to a recent announcement from Coldwell Banker Commercial Sun Coast Partners.

Two of the new tenant businesses are owned by Mike Reinhardt and Josh Beeby. One is Find Your Paradise, a store that offers original design T-shirts from the Asheville screen printing company Reinhardt and Beeby own. The store also sells resort wear, jewelry, sunglasses, Jimmy Buffet and Margaritaville merchandise and various high-end retail products, according to the release.

The second Reinhardt and Beeby business at 11 Pavilion Ave. is Find Your Paradise Beach Rentals, where visitors can rent bicycles, beach chairs and umbrellas.

Reinhardt said before deciding on a retail location, he had been doing some research about boardwalk areas and found that Carolina Beach ranked high with visitors.

“In the beginning, we couldn’t find any openings, and then we found this building and made contact with them and it worked out,” Reinhardt said of the building, which is owned by Boardwalk Landing LLC.

The businesses opened May 10.

Of the Boardwalk’s condition after Hurricane Florence hit in September last year, Reinhardt said, “I think it’s starting to recover pretty nicely from the storm. What I like about it is it looks like the boardwalk is in a transitional phase and things are becoming maybe a little bit more upscale down here, maybe a little bit more family-oriented, and we’re all about that; we’re happy to see that.”

He said Find Your Paradise has offered a doggy water bar on the outside of the building consisting of four water bowls to appeal to the pets of folks waiting in line for nearby Britt’s Donuts, which opened March 31.

In the third unit, JuSea Inc., a shop that sells smoothies, fruit juices, acai bowls and other organic, healthy snacks, is expected to be open in time for Memorial Day Weekend, which is this weekend, May 25-26.

“We are getting our first food shipment today, so we’ll be able to test and run systems with the team during this week and prepare,” said Renee Edwards, owner of JuSea. “It will be a scaled-down menu for the weekend, but we will be ready.”

Edwards, who is moving from Raleigh to Wilmington, remembers riding the bumper cars that were running on the boardwalk when she vacationed there with her family.

It’s very clear, not just from the hurricane but from when I was kid coming down, that there’s been a lot of investment in time engergy and money in the boardwalk," Edwards said.

Owner Karla Slocum is aiming for the new restaurant to be open by June 1, the news release stated.

The town has already seen an increase in tourists even before the Memorial Day benchmark, officials said.

"Carolina Beach will be fully open and eager to receive any and all," said Carolina Beach Mayor Joe Benson on Monday. "If last weekend is any indication, our shoulder seasons are shrinking in faovor of a longer summer."

As the beach town welcomes new businesses, it's also gaining new condominiums. Construction broke ground at TownePlace during the winter, and the first mixed-use building in the TownePlace development, The Islander, is projected to be complete by July, according to a recent news release.

"The upscale, loft-style condos have been in high demand. TownePlace, located in downtown Carolina Beach at 102 Cape Fear Blvd., is just steps to the beach, shopping, dining and entertainment," the release stated. "There are only 3 residential units left, in addition to the model unit which will be upfitted and used as a sales center. The ground level will be occupied by the popular local restaurant, Fork n Cork, with a projected opening of mid-June."

As a result of the success of The Islander, the release stated, developer and contractor Secof Construction has broken ground on its next building, The Cove.

"The Cove will feature two, townhome-style residences, and a single-level penthouse. Prices for the townhomes have not yet been set. The penthouse will be priced at $799,000 and will include dual covered terraces and a wet bar and [has been] engineered to support a hot tub," according to the release.

The ground level will feature 1,300-square-feet of café space.

Architect Jefferson Woodall "hit a grand slam with this one; the design is incredible” said co-developer Ken Cofer in the release. "We’ve used lots of concrete, concrete block and steel. This building is rock solid, and looks tremendous."

Sales and marketing for the project is being handled by Justin Donaton of Coldwell Banker Sea Coast Advantage/The Coastwalk Real Estate Group.