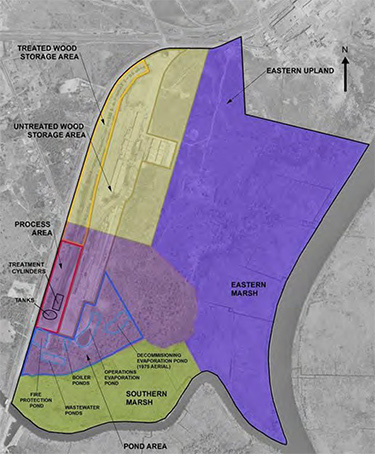 As the agencies involved in remediating the former Kerr-McGee Chemical Corp. site in Navassa continue to study what needs to be done, one entity is moving forward to identify potential buyers for the site.

“There has been some interest,” said Richard Elliott, Multistate Environmental Response Trust project manager, who is working with Robin Spinks, a site selection consultant based in Wilmington, to market the Superfund site. He said it was too early to name any potential buyers or lessees, or even to comment on what types of industries might be showing an interest in the project.

The site has many years’ worth of pollution that needs to be cleaned up.

Not all of the property is contaminated. About 100 acres, which was used only for wood storage, is considered clean, according to Erik Spavins, remedial project manager, Superfund Division, for the federal Environmental Protection Agency’s Region 4.

“It’s probably suitable for industrial use today,” Spavins said. “Part of our job is to reduce barriers to redevelopment and identify which parts [of the site] are more suitable.”

Roughly 130 acres are likely contaminated, according to Spavins, who said his office is trying to develop a strategy for remediation that will return as much of the site as possible to productive use in the short term. It may take longer to remediate a marshy portion of the property.

Despite the fact that the clean portion of the site could be developed soon, the Multistate Trust would like to find a buyer or lessee who would take the entire site and become a partner in the remediation efforts, Elliott said. “We’re open to all interested parties and have no preconceptions,” he added. “The only real caveat is that [the proposed use] needs to be consistent with the redevelopment plan concepts.”

Finding a buyer is preferable to leasing the property, Elliott said, but the Multistate Trust has leased other sites for which it had responsibility.

Throughout the process of studying and planning for the Navassa site, the Multistate Trust has worked with community members as well as non-governmental organizations in the area, Elliott said. An important goal is creating local jobs, both in terms of attracting an industry that would employ some Navassa area residents, and in using local labor in the site remediation efforts.

“We have tried to use local contractors where we could, and we’ve trained local people,” he said of other site remediation projects the Multistate Trust has managed.