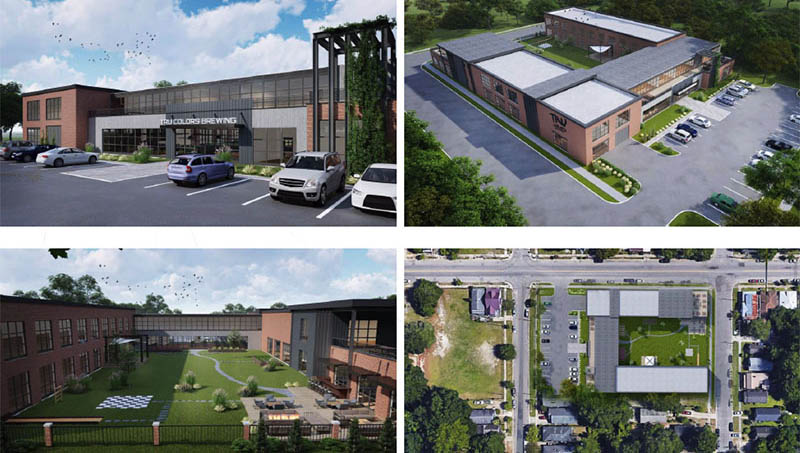 A set of renderings from TRU Impact's proposal to the city. (Rendering courtesy of TRU Impact)
Wilmington City Council is set to consider a resolution Tuesday declaring a 1.5-acre property formerly used as a Wave Transit bus maintenance facility as surplus property, according to agenda documents.

The resolution is a continuation from council's meeting in January, following a proposal by George Taylor on behalf of TRU Colors and its newly formed a nonprofit corporation TRU Impact, to purchase the property from the city.

TRU Colors Chairman Taylor said Monday that the group still wants to purchase the property from the city at "fair market value" and wants the city to further consider his proposal to develop the property into a brewery and offices for TRU Colors without going through the typical bid process for the land.

Taylor said that he formed TRU Impact with intent to purchase the city-owned property at 1110 Castle Street, as well as others in the country.

He said that since the January meeting, he has spent the past month speaking with city officials about the group's proposal for the property.

"We created this nonprofit structure in order to accommodate the laws that are in North Carolina and ... many other states that never considered a for-profit organization would have a mission-driven purpose like TRU Colors does. And so we created TRU Impact in order to have access to these properties that are in really important neighborhoods for us," Taylor said.

"And then that nonprofit can lease that out to companies like TRU Colors that are in our mission and others as well. Otherwise, there's no way for, for-profit companies to get involved in this stuff because the laws haven't caught up yet," he said.

Wilmington Mayor Bill Saffo said Monday that the city is still in the "fact-finding mode" about whether or not the new organization could meet state requirements for a city sale. Under state law, the city could only be allowed directed sales to nonprofit organizations under certain conditions. Otherwise, the city would have to sell the property through a bid process.

TRU Impact's goal, Taylor said, is to acquire facilities around the country and in cities where it is interested in working, and provide facilities and services to organizations, both nonprofit and for-profit organizations that align with its mission.

TRU Impact has a mission of combating street violence, generational poverty and racial divisiveness across America, according a proposal the group has submitted to the city.

According to the proposal, plans are to enhance the existing buildings on the property and increase the facilities' space to a total of about 30,000 square feet.

The primary tenant for the property would be TRU Colors, a 42-employee for-profit company that employs active gang members as a way to combat gang-related violence. TRU Colors' proposed building would be divided into its planned brewery business and a social mission division.

Taylor said Monday that TRU Colors has been working for the past six months to partner with a large-scale brewery, the name of which he did not disclose.

Taylor, who added that the company is still pursuing a locally based brewery, said he could not discuss the details further, but said more about the project could be released in coming months.

Taylor said TRU Impact is looking at doing something similar in St. Louis and Louisville, Kentucky.

"In times' past, there was a very clear difference between a for-profit and nonprofit company. Today, I believe anyway -- and certainly TRU Colors is a good example of this -- there are companies that are for-profit that are very committed to a social mission," Taylor said, adding that TRU Colors was created to be a "sustainable mission."

If the city council votes Tuesday to put the property up for bid, Taylor said that TRU Impact would still be interested in the property, but he would rather not have to wait.

"But we don't have until the end of the year to resolve where we will be. It's just too much time. We have been working on finding a way to acquire this property for going on eight months now. And we just can't wait any longer, we really need to get going," Taylor added.

There are other properties in the Wilmington area that TRU Impact is considering for the project, Taylor said, adding that the Castle Street property is where he feels its mission would have a greater impact on the community it serves.

Saffo said Monday that other organizations have expressed interest in the property but have not submitted proposals.

Wilmington City Council is scheduled to take up the resolution during its meeting at 6:30 p.m. Tuesday at City Hall, 102 N. Third St.