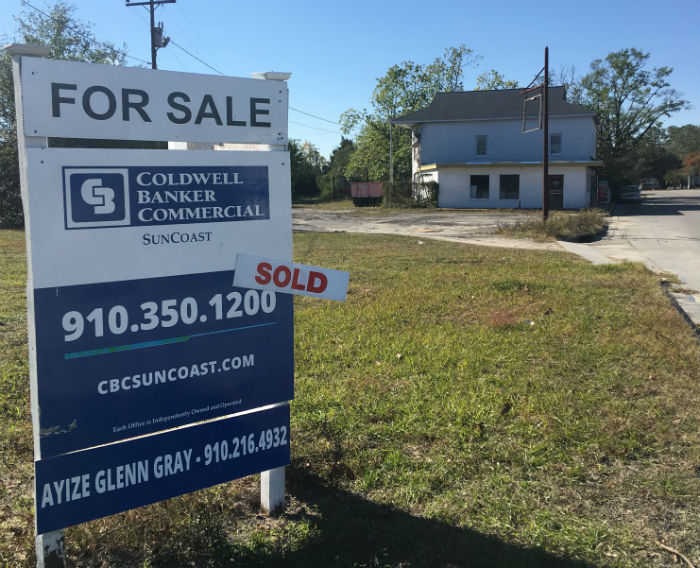 The property at 214 Southern Blvd. has been sold to a developer who plans to revamp the structure, which includes a convenience store, laundromat and an apartment, according to a news release. (Photo courtesy of Coldwell Banker Commercial SunCoast)

A building that includes a convenience store in Wilmington's Sunset Park neighborhood could soon see new life, according to an announcement Friday.

Ayize Glenn Gray, a broker with Coldwell Banker Commercial SunCoast, recently negotiated the sale of 214 Southern Blvd., which had been in the family of one of the sellers, Bobby Schupp, for more than 40 years, according to a news release from Gray's firm.

The building contains a laundromat, which is no longer operating, a three-bedroom apartment and the "mom-and-pop" convenience store.

The $193,000 sale of the property, along with part of 202 Southern Blvd., took place at the end of October to Chart Table Investments LLC, managed by J.F. Larsen, according to the deed and state records.

According to the news release, the buyer, Larsen of Gulf Commercial Properties, has a 30-year history of developing properties in the Wilmington area.

"Citing a strong building with good bones, Larsen intends to reinvigorate the property, install new equipment in the laundromat, put in new landscaping and lighting, and continue operations of [a] convenience store, in order to service the Sunset Park community," the release stated.

The apartment is set to be updated, and Larsen is also hoping to build some affordable housing and apartments on the additional land included in the transaction, according to the release.

After the property had been listed for two years, the listing was referred by a residential agent to Gray, who "was able to procure a buyer for the property quickly, but unforeseen challenges led to difficulty in closing the deal," the news release stated. "There were easement issues, right-of-way issues, family dynamics, an outdated lien against the property and finally roof damage thanks to Hurricane Florence, which all led to the necessity of three separate surveys."

Gray said in the release, “As a commercial broker it was a privilege to help a family dispose of a hard-to-sell property, manage and navigate a somewhat difficult process to close."