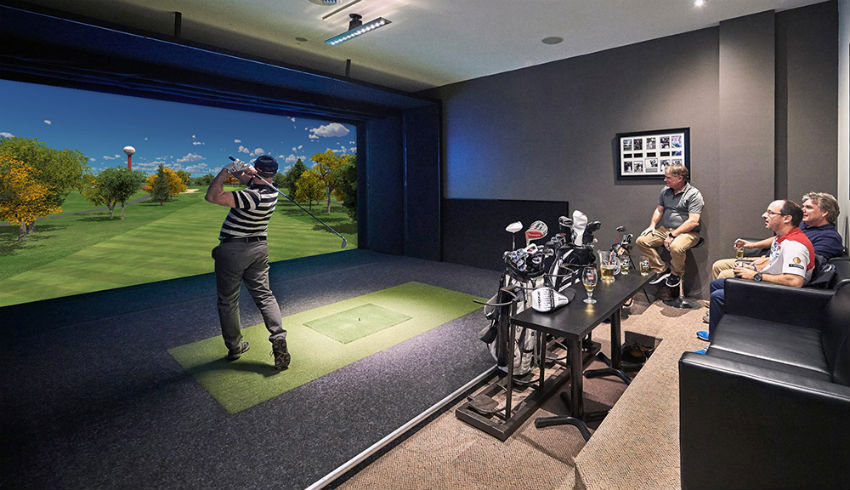 To open Club Golf Indoor, Tina and Tyler Eversole, Wilmington residents who come from a corporate background and are also avid golfers, leased the last two spaces available in Building 1 at Marina Village. The business will include four golf simulators, with software that holds golf courses across the U.S. and around the world, and a full bar.

"We both love golf; we play together in leagues, so we started to look at these simulators actually for our home," Tyler Eversole said. "Needless to say, the space that these take up is not easily justified at home so we were just talking about it and one day said, 'I wonder how many people are in this same boat?'

"We love the camaraderie that comes with the game and the competition, all in fun, and we just decided to try and bring that to Wilmington and share that with everyone."

The Full Swing Simulators at the 2,700-square-foot Club Golf Indoor have a patent on technology that reads a golfer's movements two layers after impact, and it's a kind that pro golfers use in their homes, Tyler Eversole said.

"We wanted to make sure that it was accurate that he experienced golfers would get as much out of it as the beginning golfers who can come in and play the golf scoring games we have in the software," he said.

Tina Eversole said the venue, in Suite 140 at 109 Pier Master Point, will have clubs at each simulator or players can bring their own. Club Golf Indoor will host a league each season and tournaments, the Eversoles said.

Patrons will be able to order food from neighboring restaurants Magnolia Social Cafe and Smoke on the Water that will be brought to them at Club Golf Indoor, Tina Eversole said.

"We're hoping to add more menus as more restaurants and cafes come to RiverLights," she said.

Hurricane Florence in September pushed their anticipated opening date from December to late January, Tyler Eversole said. He said the Eversoles have posted more information on their website and Facebook page and on Instagram, where potential patrons can also find updates.

Newland officials expect that with a second building under way by Monteith Construction, new commercial options, whether its restaurants or other businesses, will be on the way. The second mixed-use building will be like the first, with about 8,000 square feet of commercial space under three stories of 27 apartments.

"We're talking to several different potential tenants [for the commercial space]. We have issued letters of intent, which area all under consideration right now. We are also happy to entertain other folks who might be interested," said Jim Henry, vice president of operations for Newland Communities. "Our goal is to get that committed and preleased so that we can do the upfit of those units in parallel with the construction of the building, which is targeted to open in late August 2019."

The first mixed-use building recently sold for $4.67 million, but Newland has retained a master lease on the commercial space in the bottom of the three-story building, Henry said. In addition to the upcoming Club Indoor Golf, the tenants also include Magnolia Social Cafe, Southern Shores Craft Beer & Wine, an information center for RiverLights and a TowneBank Mortgage location.

The 1,400-acre project site for RiverLights, which at full build-out could nearly 2,300 homes, includes another 24 acres of mixed-use property.

"We have lots along the river in Marina Village that could be stand-alone restaurants, similar to Smoke on the Water, and then we also have larger parcels of commercial mixed-use acreage that could be purchased with other developer partners, could have leasable space, purchaseable space," Henry said. "There's a variety of potential uses along River Road and along the river in Marina Village."

Something like a neighborhood grocery store, for example, would allow residents of RiverLights the chance to walk or bike to pick up supplies, much as Southern Shores now allows them to pick up a bottle of wine or six-pack of beer without having to go out of their way, Henry said.

Henry said Club Indoor Golf will be a welcome addition to the mix, for RiverLights residents and others.

This year, 120 homes have sold in RiverLights so far, and 227 families are currently living there, RiverLights officials said.

The community has 32 move-in-ready homes available for sale at the moment, and a promotional event is planned for Saturday. The event, Bluegrass & BBQ, starts at 11:30 a.m. and includes a catered barbecue lunch until 2 p.m., giveaways, tours of newly decorated model homes, an HOA fee promotion and a chance to meet RiverLights builders.