Bouncing Back From Retail Voids 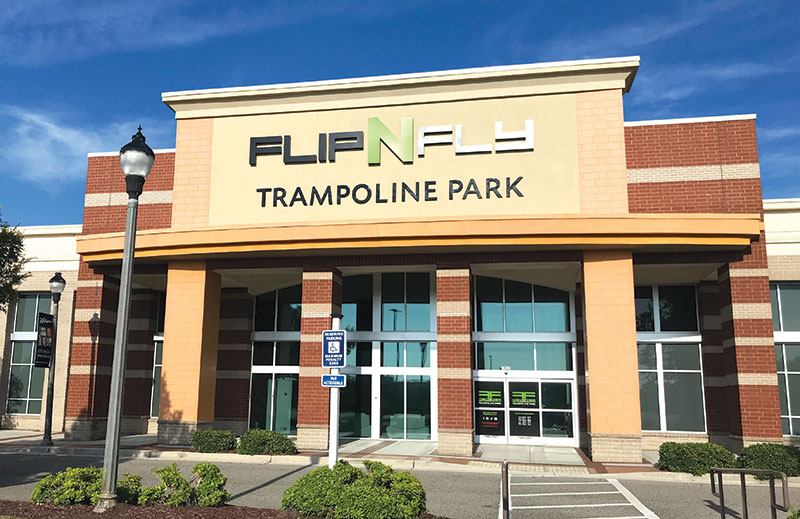 Sometimes a location dictates how quickly an empty space, whether it’s a new or existing building, might be occupied by a new tenant. In April 2017, officials with electronics chain hhgregg decided to close all 220 of its stores across the U.S., including the Mayfaire Town Center location. The Indianapolis- based retailer had filed for Chapter 11 bankruptcy in March 2017, and was unable to find a buyer before an April deadline.

In Wilmington, the hhgregg store had occupied 28,000 square feet of Mayfaire Town Center since 2009.

Halloween City used the space temporarily last year, but in June this year, Mayfaire officials announced that the store would be the home of Flip N Fly, a trampoline park and entertainment center that opened there in August.

It hasn’t been uncommon in recent years, especially junior-box spaces that have traditionally been occupied by national retailers, for entertainment or service-oriented businesses to fill the void.

“We were thrilled that Flip N Fly chose to come to Mayfaire. Flip N Fly will provide Wilmington and the surrounding areas with a premier entertainment destination for the entire family,” said Paige Coniglio, specialty leasing manager and marketing director for Mayfaire. “Mayfaire is a unique center that was originally built to capture the essence of shop, live, work and play. We are continually working to fulfill that vision. It’s that mixed-use concept, along with the setting and variety of lease packages that attracts many new businesses to Mayfaire.”

While the loss of so-called “junior” anchor or “junior-box” tenants don’t always spell trouble for shopping centers, particularly those like Mayfaire that are located in high-income areas, the loss of a major anchor tenant – the big-box stores that have in the past been 50,000 square feet and above – can have a big impact.

“I think that Amazon has just changed the world of retail with more and more people shopping online and big-box stores may not be needed,” said Wilmington Mayor Bill Saffo, a licensed real estate agent who’s been in the real estate industry for several years. “And I think that will be a great opportunity for a lot of redevelopment to take place in the next decade.”

Two examples of recent big-box closures in Wilmington: the Sears at Independence Mall and Kmart on South College Road.

The 185,000-square-foot Sears store at the mall closed this summer, and mall owner Brookfield Properties, which has announced an upcoming transformation of the 1970s-era shopping center, plans to replace the Sears and Sears wing with a 27,500-square-foot grocery store and other retail and restaurant exterior- facing spaces.

The plans submitted to the city of Wilmington earlier this year also show that the largest retailer would be 50,000 square feet along the new outdoor corridor on what’s been the Sears side of the mall, along with two new restaurant outparcel buildings closer to Oleander Drive.

Wilmington’s Kmart store closed in March last year, and developers submitted plans to build housing and commercial space on the property, which sits next to the University of North Carolina Wilmington.

But Kmart ended up renewing its lease on the now-vacant store.

“Controlling good real estate, long term, at attractive market rents provides the company with many opportunities,” said Howard Riefs, spokesman for Kmart owner Sears Holdings Corp., in an email on July 27 regarding the renewed lease. “At this time, a decision has not been made regarding its future use.”

Wilmington-based GHK Cape Fear Development and Capstone Collegiate Communities, a Birmingham, Alabama-based student housing development company, had joined forces to plan, on the Kmart site, a project called The Hamilton, a mixed-use development that would hold up to 899 student beds in one-, two- and four-bedroom apartments.

The Hamilton would also include 28,000 square feet of restaurant and retail space.

Officials planning The Hamilton declined to comment in July on the student housing project’s future.

City planners and leaders have long used the Kmart site, even before the store closed, as an example of a property that was prime for redevelopment.

Other retail spaces in Wilmington that could soon see reuse include former Rite Aid locations throughout the city, and the Toys R Us building on Oleander Drive.

Any property on the market in that part of the city, especially around the Oleander Drive and South College Road intersection near the former Toys R Us store, is likely to draw a lot of interest, said Steve Hall, a partner in Wilmington-based commercial real estate firm Maus, Warwick, Matthews & Co.

“It’s in a great location, at one of the busiest intersections in Wilmington, and I’m sure they’ll quickly find another box-user to come in and take over that space, without a shadow of a doubt,” Hall said.

Silivanch and ECCRE broker David Branton recruited the new tenant to the facility on a long-term lease.

But every case is different, with factors from perceptions about the location to restrictive covenants enforced by leases with national retailers coming into play.

Badcock Home Furniture closed its University Centre location off South College Road in Wilmington several years ago, and since then some temporary tenants have used the space in the Sam’s Club-anchored center.

“National retailers have felt that because it’s so deep into the property, that visibility from the road isn’t there and that’s a challenge, but once you’re in the center and with monument signage, your name and your brand is visible,” said Silivanch who manages leasing for the center. “People will come into the center to find you.”