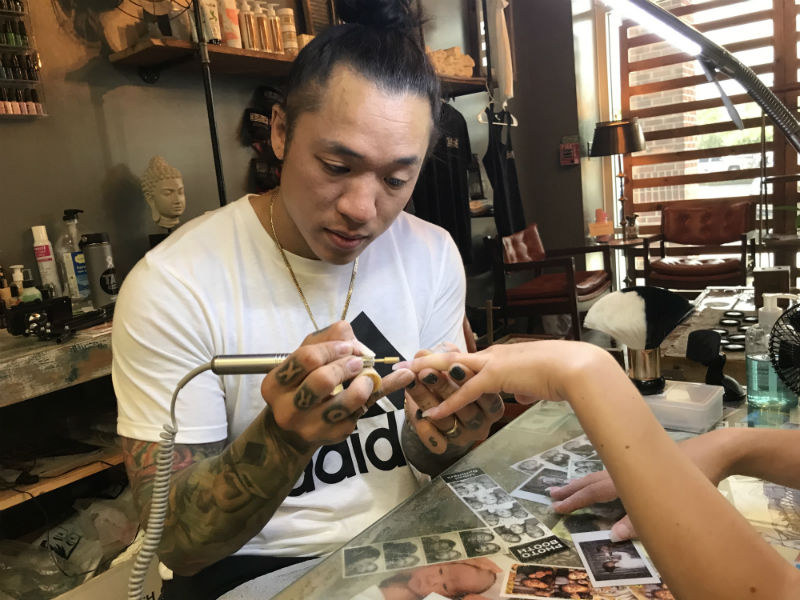 GDN Nail Bar owner Dynh Le works on a clients nails at his 132 Racine Drive location in May. He is opening a downtown nail bar on Princess Street. (Photo by Cece Nunn)
Historic space under renovation in downtown Wilmington is set to become the home of a second location for nail salon owner Dynh Le.

Le opened GDN Nail Bar at 132 Racine Drive two years ago, and now has plans to open another GDN nail salon at 222 Princess St. GDN stands for "Guys Do Nails."

Le, who has been doing nails more than half his 31 years because he grew up in his family's nail salon business in Winston-Salem and then New Bern, said he thinks his business will help meet demand for nail services in downtown Wilmington.

"With downtown, you've got PPD, all the new apartments opening up. You've got new businesses coming, you've got foot traffic, you've got bars, you've got special occasions,  especially with Downtown Sundown starting," Le said in mid-May, referring to the downtown concert series that began May 25 and continues on Friday nights through Aug. 31. "Exposure is super key for me right now."

Le hopes to be in the new space soon, but historical renovations can come with complications. The structure, built in 1905, is being rehabilitated by owner James Goodnight, a developer who has been transforming several historic spaces on Front Street and is also working on the adjacent 226 Princess St.

Of Le's nail business, Goodnight said, "It's going to be a really neat fit especially with what's going on on Princess Street right now. It's turning into a really cool strip of retail."

Le leased the space in the 2,600-square-foot building with the help of his real estate agent, PJ Doherty, managing broker of Carolina Commercial Investment Properties.

Le said he wants the downtown location to have the same vibe as his Racine Drive nail bar, where the decor is "rustic-industrial-vintage-eclectic."  He was drawn to Princess Street for a number of reasons, including the proximity to existing businesses on the street like Bespoke Coffee & Dry Goods, Memory Lane Comics and Bloke Apparel & Supply, and the bell carved on top of the facade at 222 Princess St.

As far as the philosophy for his nail salons, Le said he focuses on creating a personalized experience and carefully chooses the members of his staff.

"The best customers are the returning customers," he said. "You've got to make them happy and want to come back."