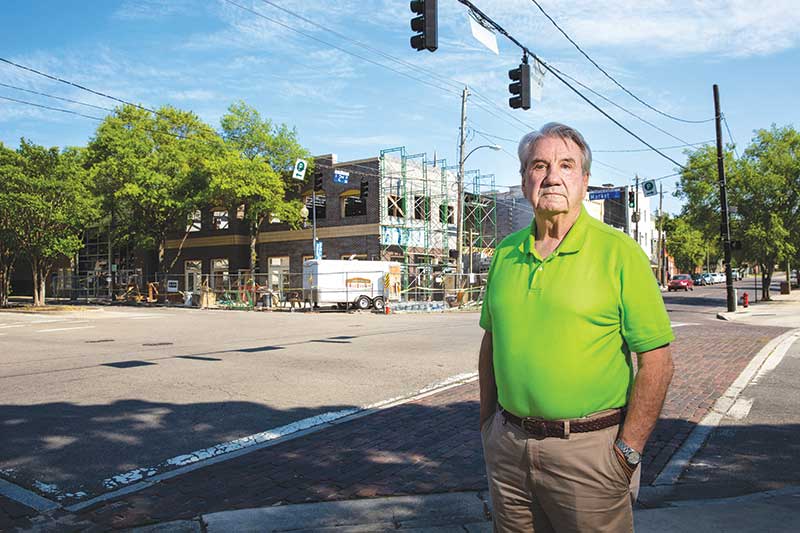 Gene Merritt is working with developer John Sutton to fill a small surface parking lot with a two-story building, currently under construction (in the background), that will have a night club on the top floor and retail space on the bottom at 200 Market St
Gene Merritt isn’t a big fan of surface parking lots in downtown Wilmington, an area with some of the highest real estate values in the region.

That’s one of the major reasons why Merritt is helping developer John Sutton create a 10,000-square-foot two-story building that will house a nightclub on the top floor and small boutique retail spaces on the bottom at 200 Market St. The building, currently under construction, will fill in a small surface parking lot at the corner of Market and Second streets, and Merritt said he hopes it will be complete by July.

Hundreds of millions of dollars in major development investment is on the way or in the planning stages for downtown Wilmington, but relatively smaller projects are also having an impact.

Even smaller downtown development can come with benefits but also present challenges as the area continues to evolve.


FILLING IN THE BLANKS

A noticeable amount of redevelopment and renovation activity is taking place along the city’s streets, particularly on Front and Princess streets, but downtown Wilmington still has its share of properties with untapped potential. In the 1970s, however, the picture was much bleaker: downtown was known for holding derelict buildings, adult bookstores, topless bars and little pedestrian traffic.

“When I came here 40 years ago to work, you could fire a cannon down Front Street without hitting someone,” said Merritt, who co-founded the Downtown Area Revitalization Effort Inc., which eventually became Wilmington Downtown Inc. (WDI). “That’s no longer true.”

Now that numerous pedestrians, sometimes crowds, can be seen in downtown’s streets and on its sidewalks, recent projects that have led to more complete blocks are more important than ever, said Ed Wolverton, president and CEO of WDI.

An example of that is what’s happened in the 200 block of Front Street between Chestnut and Grace streets, where downtown renovations have emerged in the form of Pour Taproom, Outdoor Equipped, Waffle House and Expo 216. To add to it, another potential redevelopment of class-A offices could take shape in the long-vacant hist

oric building at 226 N. Front St., which is under contract by East West Partners, the company developing River Place.

River Place is a public-private partnership between East West and the city at 200 N. Water St. and will be a 13-story structure with condominiums, apartments, retail space and a new parking deck replacing the defunct Water Street parking deck that was built in the 1960s. The project price tag is more than $80 million.

Small and large projects are connecting blocks, keeping pedestrians moving throughout the city and helping the growth of nearby downtown businesses, Wolverton said.

But the area could use more office space and more active ground and upper floors, he said.

“Having these offices that can absorb the space in upper floors is really important and yet it’s also a mixed-use environment. So even if some of these transition over to residential, that also has a positive impact as residents are going to be more prone to visit the shops and restaurants and attractions that are within easy walking distance. That helps to build a market to support the retail users that are nearby,” Wolverton said.

Wolverton and others who keep an eye on downtown real estate and developments point to historic renovation projects like those of developer James Goodnight, son of SAS co-founder and CEO Jim Goodnight, as catalysts.

“I think he’s been a good example of responsible ownership and that he is raising the bar a bit in terms of aesthetics. I’m extremely impressed with what he did at Front and Market with that corner building,” said Merritt, referring to 1 S. Front St, where Goodnight has created office space on the upper floors.

An office tenant has leased the third floor of 1 and 9 S. Front Street, where a connection between the two buildings was re-established during the renovation process, Goodnight said, and he expects to begin a broader marketing push for the second floor soon.

When it comes to historic renovation projects, Goodnight said, “somebody has to come along and tackle those and find some way [to create] adaptive reuse. The old buildings are what really give Wilmington its character.”

Goodnight rehabilitated the building at 21 S. Front St. that serves as the headquarters for Untappd, a company that has grown to almost 100 employees.

Wolverton said of the building, “Upper floors hadn’t been touched in over 30 or 40 years. The owner comes in, buys the building, the tenant relocates, they totally rehab the structure all the way up to the third floor.”

But some owners don’t rehabilitate their properties, a practice that is not unique to Wilmington.

“There are certainly examples all across the country where investors come in, they buy property with no intention at all of building any kind of development. They’ll just let it sit. Often times, they may not even keep up the property to any particular standard and set a price that may not be realistic for the development community,” Wolverton said.

Rising prices for downtown property is already an issue. Pace Burt, a developer based in Albany, Georgia, who is known for historic renovation projects throughout the South, recently invested in the first floor of the former Soapbox building on North Front Street in Wilmington. For Burt, the purchase is an investment in a space where Waffle House is a long-term tenant rather than a renovation project. He said he might be interested in rehabilitating a downtown Wilmington property, but he’d need “to find the right building and find the right seller who is willing to make the numbers work. That’s always the issue right now. These downtown buildings have just quadrupled in price in the last five years because there’s such a demand.”

Burt said in Wilmington, “I looked at a few buildings that were for sale and they were just kind of too pricey for me.”

While River Place is moving forward, New Hanover County has taken a step toward another major project, Project Grace, the name for the potential redevelopment of the county-owned block bordered by Grace, Third, Chestnut and Second streets. Officials have issued a request for qualifications (RFQ), due by June 15, for potential developers of what could be a public-private partnership.

Project Grace could carry a hefty price tag of up to about $120 million, but less expensive projects are also on the horizon. For example, Saffo, a licensed real estate broker, and members of his family are part owners of 615 N. Front St., which was previously home to TV station WWAY. While the new owners are still considering what to do with the property, a state environmental application related to the site describes the potential for a $50 million project that includes a hotel, apartments and restaurant space.

“There are a number of vacant lots along North Fourth Street that are ripe for development,” Wolverton said. “That’s a corridor that needs that next project to emerge.”

In downtown’s northern gateway, Wolverton said there remain four contiguous blocks on the west side of North Third Street that are either vacant or underused.

Saffo said the city bought property within those blocks because officials were concerned about what the downtown gateway would look like in the future. They now have a say in how that’s developed. A planned mixed-use development would be ideal, he said.

“We’ll probably do some kind of combination, hopefully work with other property owners in that location to do an overall package that will be attractive to developers, and we have already had several that have inquired about it,” Saffo said, adding that an RFQ or request for proposals (RFP) could be issued by the city in the next year.

“It’s a lot of vacant land,” Saffo said. “It’s the new frontier, I say, of downtown for development.”

That development also depends on the timing of the downtown Salvation Army building a new facility on North 30th Street, Wolverton said.

“We are going to continue to grow all these uses. We’ll see more density with the ability to go vertical. There does remain opportunities for new development both big and small, in terms of infills,” Wolverton said. “We’re continuing to move forward with all this … We’re going to stay as the highest tax base.”