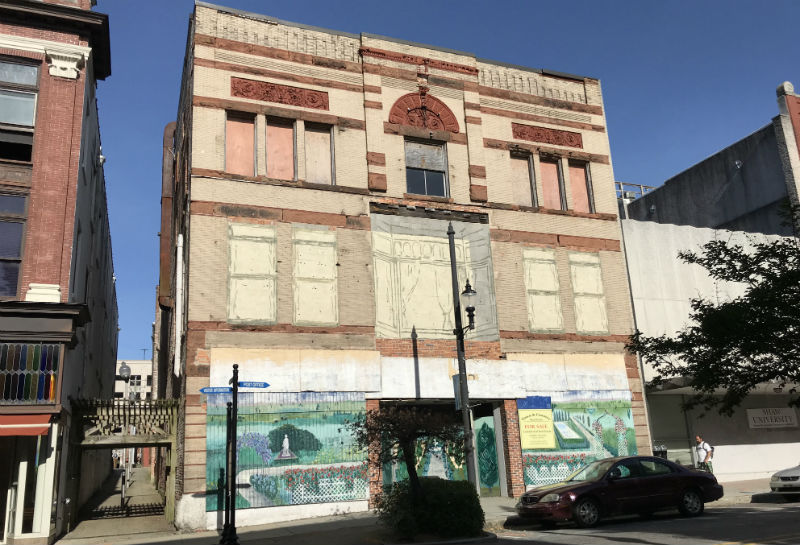 East West Partners, the company developing River Place in downtown Wilmington, also has the historic structure at 226 N. Front St. under contract. (Photo by Cece Nunn)
The company creating the major redevelopment project River Place in downtown Wilmington plans to buy a long-vacant, historic building on North Front Street with the aim of turning it into high-quality office space.

East West Partners, the Chapel Hill-based firm involved in a public-private partnership with the city of Wilmington to redevelop the former site of the old Water Street parking deck into a 13-story mixed-use building, has 226 N. Front St. under contract for an undisclosed amount.

The three-story building East West expects to buy, which has been vacant for decades and is covered with a handpainted mural, contains more than 26,000 square feet in a brick shell with wood beam construction and steel columns.

"We want to renovate it into a class-A office space," said Lucien Ellison, a partner in East West Partners and River Place project manager. "It's a fantastic location; it's right in the middle of the heart of downtown."

And the demand for office space in the area is expected to remain strong, he said.

"We see the office market in downtown Wilmington as a growing opportunity," Ellison said.

The list price for the property on the N.C. Commercial Multiple Listing Service is a little over $1 million.

The structure, which in 1903 housed Gaylord Department Store and then later a Belk and Walgreens, is owned by DeYoung Family Properties LLC. Parts of the building might date back to well before 1903, however; possibly to 1888, said Bob DeYoung, one of the current owners.

In the 1990s, DeYoung and a friend of his were asked by residents leading a downtown revitalization effort to save the building.

The rescue proved to be more work than anticipated. The structure, which had been vacant for a long time even before DeYoung and his friend purchased it, needed a lot of work, DeYoung said, including a new roof.

Over the years, DeYoung said, he had many opportunities to sell the structure to buyers that would have turned it into a bar.

"Our feeling was that by buying the building, we took on a responsibility, that downtown should develop in a way that went across the board, not just become a bar town," he said.

The building is in close proximity to the site of River Place, and DeYoung said he believes East West will be able to turn the structure into something that will enhance the redevelopment project and the rest of downtown.

River Place, in the works at 200 N. Water St., is expected to include 92 luxury condominiums, 79 apartments and 32,000 square feet of retail space in a 13-story structure. It will also include 403 parking spaces and is expected to be complete by 2020.