At Mayfaire, Wilmington Scientists To Open The STEM Labs For Kids 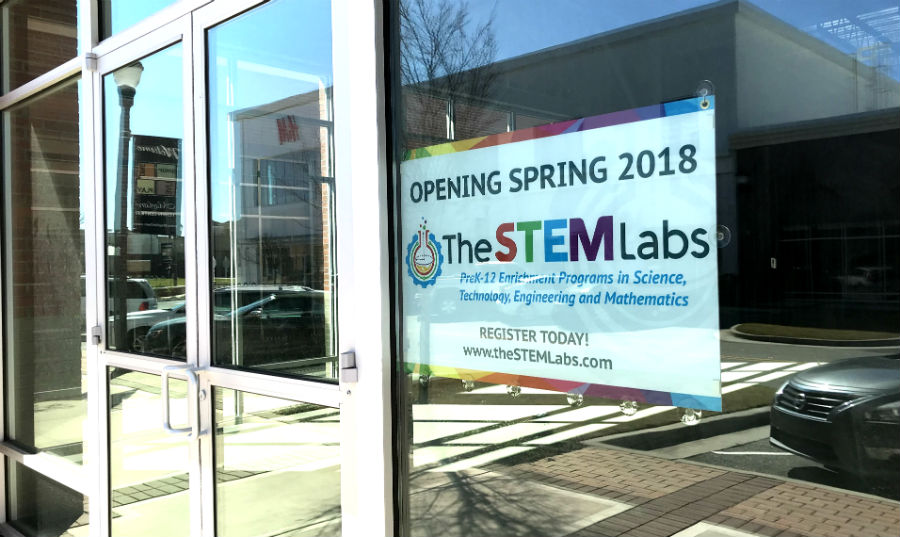 The STEM Labs is expected to open in May at 820 Town Center Drive in Mayfaire Town Center. (Photo by Cece Nunn)
Two Wilmington scientists have synthesized a business that will offer students in kindergarten through 12th grade the opportunity to experience science, technology, engineering and math (STEM) through a variety of programs.

Tina and Brad Catalone, a married couple with backgrounds in the pharmaceutical and biotechnology industries, are opening The STEM Labs at Mayfaire Town Center, in new space at 820 Town Center Drive.

The STEM Labs enrichment programs will include after-school care, summer camps, workshops, a leadership academy for middle- and high-schoolers, tutoring, academic advising, preschool labs, birthday parties and parents’ night out events. The space will be upfit with miniature laboratories.

To boil it down: things like robots, slime-making, 3-D printers, Legos and drones are part of the curriculum.

The Catalones plan to open their new venture at the Mayfaire location in May, with future plans for growth elsewhere.

“We want to start it here in Wilmington and have a really solid beginning, but we know that there is so much demand right now in trying to educate in the STEM professions, and we know that there’s a huge opportunity here,” Tina Catalone said. “So we’d really like to grow, and grow pretty quickly in terms of reaching as many students as we can and to implement this new idea.”

Tina Catalone has a doctorate in cell and molecular biology from Penn State College of Medicine, and Brad Catalone has a doctorate in microbiology and immunology from the same school. He was vice president of laboratory operations at Alcami Corp., and Tina Catalone was a project manager in laboratory and development services at the same company, a drug development and manufacturing firm that has moved its headquarters from Wilmington to Durham. The Catalones both left Alcami in September of last year.

The couple has four children, ages 14, 11, 8 and 6, who have served as inspirations for The STEM Labs.

“We both are researchers and scientists. I met my husband in grad school. We worked together and published together early on. I went on the path of being a research scientist – I did a lot of vaccine development work and pharmaceutical biomedical research,” Tina Catalone said.

“He started going into the business operations side, so really the two of us coming together for this initiative is a great team because we complement each other so well. I also went down the track of education as a college professor for a number of years as well and still have an affiliation at UNCW,” Tina Catalone said.

She said she’s working with the University of North Carolina Wilmington with a workforce development grant that aims to give students real-life experiences and create internships.

“I just feel like that is one of those missing links out there. And that is really what makes all the difference and that comes back to why we are building The STEM Labs for a community partnership to try to take that kind of concept and bring it down to another level for the students,” said Tina Catalone, who is president of The STEM Labs, while her husband is vice president. Brad Catalone is also chief science officer at TSO3, a sterilization processes firm in Myrtle Beach, South Carolina.

They'll have a roster of 20 part-time employees, many of whom have experience as STEM professionals or executives.

"We're going to have a diverse group of really talented people who believe so strongly in the mission of giving back to these students and really helping them to grow in ways that they may not have exposure to right now," Tina Catalone said. "We want to supplement what they've already been getting in the education system; we want to offer something a little bit above and beyond and different and bring some gadgets in they may not have exposure to otherwise."

One of the sessions they're planning will bring in an aviculturist (a person who keeps and breeds birds) to talk about zoology.

"She'll be talking about what a day in the life of a zookeeper is really like at one of the largest zoos in the country," Tina Catalone said.

She said the aim of The STEM Labs is to help students absorb knowledge in a hands-on way. Tina Catalone said, "The more you're exposed to it and the more opportunities you have to work with it [STEM] and different perspectives you take, it all comes together in the end."