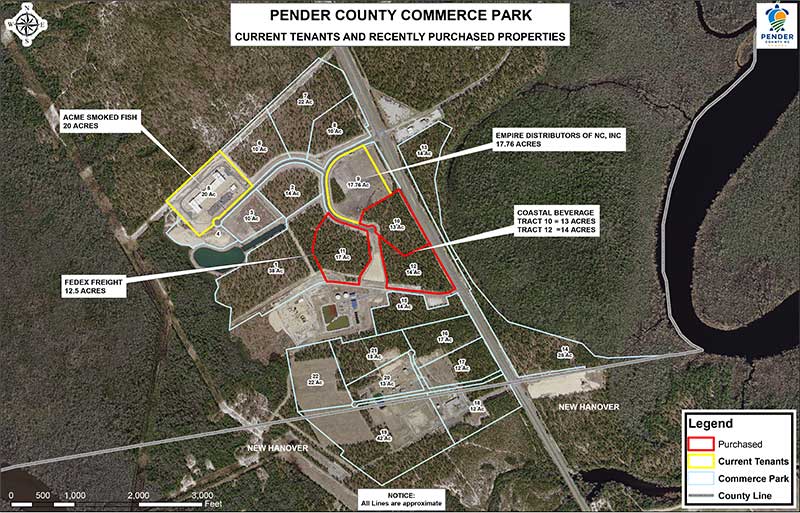 More space will be taken up at the Pender Commerce Park, as shown in this map, with the coming of two tenants announced by the county and economic developers in early February. (map c/o Pender County)
After two years of a lull without new tenants, a national logistics company and statewide beverage distributor are now planning to invest in the Pender Commerce Park.

FedEx Freight and Coastal Beverage Co. Inc. are set to become the newest tenants at the industrial park, located off U.S. 421 near Currie. It’s the latest activity to happen at the industrial park, which comes years after Empire Distributors, a beverage distribution company, established operations there in 2015. New York-based Acme Smoked Fish was the first to locate to the park in 2013.

Pender Commerce Park, a full-service industrial park, was completed as part of a partnership between Pender County and Wilmington Business Development (WBD) in 2011. The industrial park is owned by the county.

Pender County Commissioner David Williams said previously it is “exceeding the expectations we envisioned for it a decade ago when it was only an idea.”

The county has spent nearly $4.2 million on the park through acquiring the land and investing in the park’s infrastructure, according to Pender County Manager Randell Woodruff.

In attracting the new tenants, no incentives were offered by the county to bring the businesses to the site, he said.

Incentives were, however, offered to ACME Smoked Fish through land pricing and other concessions, Woodruff said, “because at that time the county felt they really had to go above and beyond to get the park started and to get its first tenant.”

The investments made in Pender Commerce Park were significant for the county, County Commissioners Chairman George Brown said, adding that the county is beginning to see a return on that investment, now that the park expects to have a total of four tenants.

The park is situated at the New Hanover-Pender county line on about 450 acres of land.

WBD CEO Scott Satterfield said the property has been a “significant regional product” that is enhancing the connectivity of the regional economy. But such projects like bringing in the most recent tenants take time. “This doesn’t just happen. It’s very detailed,” he said.

“One of the most important things that any community can have is well-infrastructured property that companies can consider locating on with essential utilities that are in place and in a location that is in close proximity to the needs that many companies have. And I think Pender Commerce Park clearly checks the boxes for a lot of different types of operations,” Satterfield said.

Location was a factor that attracted one of the nation’s largest logistics brands to Pender Commerce Park, according to officials with FedEx Freight.

“The new facility will be larger and allow us to better serve our customers in the Wilmington area now and in the future,” Ron Mears, spokesman for FedEx Freight, said in an email. “The site was chosen because of its ease of access to major highways, proximity to customers and a strong local community workforce.”

FedEx plans to invest at least $5 million in its new hub at the industrial park and host at least 25 jobs at the site, initially, Satterfield said. Coastal Beverage Co. also plans to spend nearly $853,000 on 27.7-acres of land at the site, according to county documents.