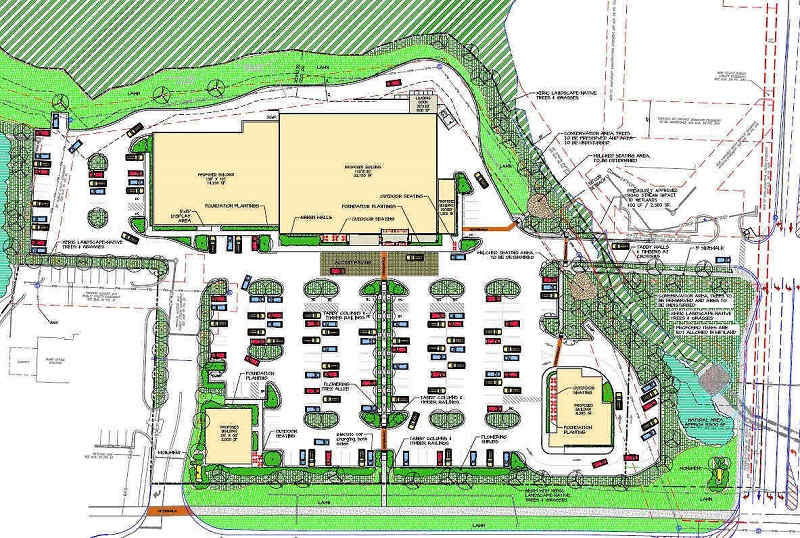 A health food grocery store new to the area is coming to Wilmington to the northeast corner of Military Cutoff Road and Sir Tyler Drive, according to an announcement Friday.

Earth Fare has signed a lease to anchor Renaissance Market, a retail center under development by Harbour Retail Partners and Trask Land Co. Founded in Asheville as a 1,200-square-foot store called Dinner for the Earth in 1975, Earth Fare is one of the largest natural and organic food retailers in the country, with 45 locations across 10 states in the Southeast, mid-Atlantic and Midwest, according to the company's website.

Two other tenants were also announced Friday morning. The 45,546-square-foot center will include the 22,700-square-foot Earth Fare as well as a 14,250-square-foot West Marine and a 3,000-square-foot Blaze Pizza, the release stated.

The release said that the partnership is actively marketing the remaining 6,000 square feet of retail and restaurant space. Construction is expected to begin in February with an anticipated opening in the fourth quarter of this year.

“We are thrilled to bring a unique set of tenants to a thoughtfully designed center. Over the years we’ve been patient about master planning the Renaissance corridor to create a mix of uses including office, hospitality and residential. We intentionally saved the heart of the watermelon for a specialty retail center like Renaissance Market and excited about creating a shopping environment that fits the coastal nature of Wilmington,” said Raiford Trask III of Trask Land Co. in the release.

West Marine will relocate from Lumina Commons, officials said. With more than 250 stores in 38 states and Puerto Rico, and an e-commerce website reaching domestic, international and professional customers, West Marine is an outfitter of boating supplies, equipment and accessories for cruisers, sailors, anglers and paddlesports enthusiasts, according to the release.

Blaze Pizza has more than 200 stores in 32 states and is known for fresh and “clean” ingredients, the release stated, adding that pizzas are cooked over an open-flame oven.

Earth Fare is the latest in a series of new grocery brands to target the Wilmington area. Publix opened its second Wilmington grocery store in Ogden Market Place in November, and discount grocer Aldi opened locations throughout the region last year.

“We enjoyed collaborating with the Trask family to come up with a project design of which our tenants, customers, neighbors and the city would be proud,” said Randy Kelley, principal of Harbour Retail Partners, in the release. “The architecture of the shopping center will have a classic coastal feel, and we intend to offer unique common area amenities such as green walls, electric vehicle charging stations, natural xeric landscaping, ample pedestrian walkways and outdoor dining areas. We are excited about bringing new concepts to Wilmington including Earth Fare and Blaze Pizza."