Mixed Use At Risk? 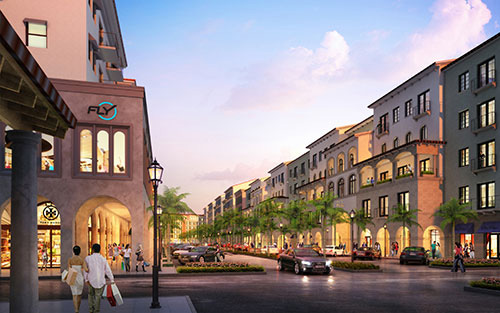 An artist’s rendering of The Avenue, a proposed mixed-use development on Military Cutoff Road, shows ground-floor high-end retail with apartments on top. (Rendering courtesy of The Carroll Companies)
The Avenue.
Project Grace.
Galleria.

(Add to that CenterPoint, which was announced this week.)

New Hanover County’s Project Grace is the least defined, as county officials weigh whether to pursue a public-private partnership to redevelop a downtown Wilmington block the county owns. Officials say the impetus is to possibly turn an underused block into a property that contributes to the area’s tax base while still offering public services, including the main branch of the county library and a parking deck.

The project could add hotel rooms, apartments, offices and retail space at a cost of $76 million to $120 million. 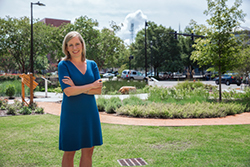 From the planning side, said Jennifer Rigby (right), the county’s strategy and policy coordinator who has been spearheading Project Grace, mixed-use projects allow for the consolidation and effective use of water, sewer and roads while helping to alleviate traffic congestion.

It’s also something millennials and baby boomers are clamoring for because of the walkability and convenience mixed-use areas are supposed to provide.

“You’ve got the planners saying this is a much more efficient way to grow and a much more sustainable way to grow, and then you have the consumer saying, ‘This is what we want,’ and so it creates an opportunity for great success,” Rigby said.

But out-of-date land regulations present potential problems, Rigby said, though the county’s and city’s rules are currently undergoing an overhaul. While any momentum for Project Grace will be up to public officials, two private developers have hit the pause button on their plans because of recent roadblocks.

Roy Carroll, founder, president and CEO of Greensboro-based The Carroll Companies, and Jeff Kentner, president of State Street Companies, shared their views on the benefits and challenges they’ve been facing as they separately try to develop mixed-use projects in Wilmington.

Carroll is working on The Avenue, a $200 million Westin-anchored community that would be built over 10 years on Military Cutoff Road.

Kentner, whose company is based in Charlotte, is planning a more than $160 million project on the former Galleria site on Wrightsville Avenue, starting with upscale single - family homes.

“Most municipalities right now are really pushing mixed-use. For example, if we went to Charlotte right now and tried to do something, we could not do something anywhere in the Charlotte downtown or core unless there was a mixed-use component to it because municipalities are concerned. They want live-work-play environments – everybody,” Carroll said. “And Wilmington – that’s what we were told two years ago [about The Avenue plan]. ‘Create mixed-use. We really don’t want to see a standalone multi-family again.’”

But Carroll’s efforts to seek approval from the city’s Planning Commission for The Avenue have been delayed after a Wilmington city staff report said Military Cutoff is the “wrong location” because of the anticipation of an exponential increase in traffic. 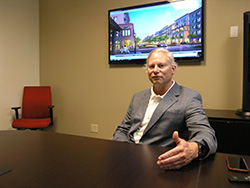 Carroll (left) refutes that assertion and plans to come back to the Planning Commission with The Avenue in November, in the meantime hoping to clear up what he says are misconceptions in the report. Those misconceptions include, Carroll said, the idea that The Avenue would have 300,000 square feet of retail space, enough to fit two Walmart stores.

The Avenue’s retail space would be more like a total of 100,000 square feet that would be “scattered across 44 acres that’s in the bottom of buildings built out over 10 years,” said Carroll, whose company bought more than 30 acres of the site last year and has another 10 under contract.

Could Wilmington afford to lose a project like The Avenue or Airlie at Wrightsville Sound, the trade name for the Galleria site project?

“Changing the land-use pattern in Wilmington from single-use, suburban sprawl development to mixed-use development is critical for the city’s future,” Kentner said. “The current development pattern is unsustainable and is a deterrent to economic growth.”

For The Avenue, Carroll said, just the Westin alone would lead to economic growth.

Kentner said some reasons for the absence of mixed-use communities in Wilmington include “the scarcity of appropriate sites and an outdated set of ordinances, which impose unbearable and unnecessary burdens on the developer. It is much easier to develop a single-use project.”

But the biggest obstacle, he said, is the city’s poor transportation infrastructure.

“Mixed-use communities are based on the live, work and play concept where most of life’s daily needs are within a 10-minute walk or bike ride. A walkable, mixed-use community will never exist without a corresponding transportation infrastructure that includes connected sidewalks, connected bike lanes and public transportation,” Kentner said. “In fact, in order for State Street’s proposed mixed-use project to be developed to its full potential, Wrightsville Avenue would have to be upgraded to provide connected sidewalks, connected bike lanes and the placement of utilities underground.”

Carroll said despite the city staff’s report, a better understanding of the scale of the boutiques, improvements on Military Cutoff Road and the project’s 10-year timeline would alleviate the traffic concerns the city has had with The Avenue.

The improvements that would be made by The Carroll Companies would cost between $1 million and $2 million.

Kentner said State Street wants to develop the 31-acre Airlie on Wrightsville Sound to its fullest potential, but “we’re trying to figure out whether or not the city’s technical standards” could be compatible with a true mixed-use project.

"State Street intends to build a landmark upscale mixed-use development and is prepared to move forward provided the city commits to do its part," Kentner said in an update Friday. "Our site is extraordinary and is ideal for upscale mixed-use. The only remaining obstacle is completing the upgrades to Wrightsville Avenue."

He said he had productive meetings with city leaders earlier this week and he is "now very optimistic the city is committed to the project."

This story has been changed from its original version to include updated information on the Galleria site project.