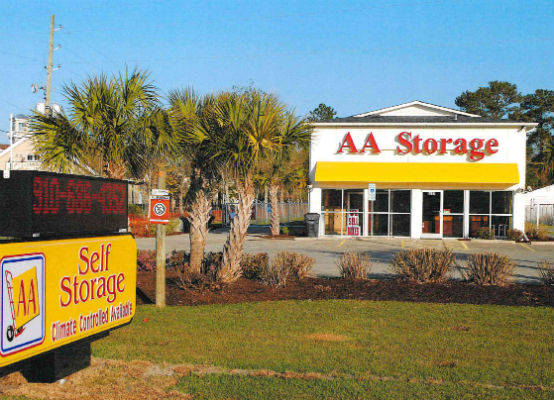 Self-storage facilities continue to be big business in the Cape Fear region, including new projects and expansions at existing properties.

And the noticeable increase in recent years isn't unique to New Hanover County. In June, James Martin of Martin Self Storage Centers said crews recently completed a 20,000-square-foot addition to the company's facility at 1725 Southport-Supply Road in Brunswick County. The project brought the total number of self-storage square feet at the property to about 90,000, with 5 acres set aside for future expansion.

Construction of an additional 80,000 square feet at the Martin Self Storage Center at 7815 Ocean Highway in Leland, purchased in 2016, will include climate-controlled space and enclosed boat and RV spaces on 6 acres of additional unimproved property, bringing the total to about 120,000 square feet over the next two years, Martin said in a recent email.

He said in the June 17 email that construction was expected to start within three months.

In another Brunswick County example, The Rosemyr Corporation, the parent company of AA Self Storage, bought property at 1557 Brunswick Village Road in Leland for the construction of a new 84,000-square-foot storage facility, according to an announcement Tuesday.

Chuck Lydon and Lee Weddle, agents with Coldwell Banker Commercial SunCoast, represented The Rosemyr Corporation in the property sale, the news release said. The seller was Funston Land & Timber LLC, one of the development partners of Brunswick Forest in Leland.

The new AA Self Storage facility is under construction next to the Brunswick Forest Veterinary Hospital and is the newest addition to The Villages at Brunswick Forest, a 160-acre town center comprising more than 500,000 square feet of retail and professional services.

With an estimated completion month of September, the facility will feature 300 climate-controlled units, 47 traditional units and 77 covered boat/RV spaces, according to the release. The Leland facility will be the 13th location for Henderson-based AA Storage, which has facilities in North Carolina and Virginia, and the firm's first location in Brunswick County.

“We have purchased and expanded two AA Self Storage facilities in the Greater Wilmington area since 2010 and we’ve been looking to get into Brunswick County for some time,” said Bill Coffey, president of The Rosemyr Corp., in the release. “This area is really growing and the demand for storage facilities in Brunswick County is very high, as evidenced by the three new locations that are under construction in the Leland area alone. Our location within The Villages at Brunswick Forest gives us a distinct advantage, and we anticipate that a lot of our business will come from Brunswick Forest residents.”

Demand throughout the region has driven the push to build more units, developers say. Currently, a 76,000-square-foot self-storage facility called The Vault on 17th Street is under construction at 1101 S. 17th St. next to the StarNews newspaper offices. The project represents a first for GHK Cape Fear Development and its partners.

Mike Brown, a partner in GHK and a broker with Wilmington commercial real estate firm Cape Fear Commercial, estimated Tuesday that The Vault on 17th Street will be complete by spring 2018.

"New supply wasn't coming on the market here for five or six years," Brown said of the recent influx of self-storage projects. "The market's catching up with demand."

Brian Chambers, planner for the city of Wilmington, said self-storage development is definitely market-driven, "and we see this after a boom in residential development, particularly multi-family. They tend to follow that type of development pattern."

Bee Safe Storage & Wine Cellar, a subsidiary of The Carroll Companies, has 40 facilities under construction throughout North Carolina and other states, and one is planned on Market Street in Wilmington.

"Ours is really upscale. It looks like an office building. We do all brick exterior, we do stone on it, and we do the wine storage,” said Roy Carroll, founder, chairman and CEO of Greensboro-based The Carroll Companies.

Carroll said he’s keeping an eye on how much self-storage development, particularly upscale self-storage projects, is going on in the Wilmington area as he continues to plan the 85,480-square-foot location at 7597 Market St. He likened the current boom to when auto parts stores were competing to capture consumers in certain areas.

Carroll predicts that "the self storage boom will probably start to level off the last quarter of this year due to market saturation. You will see much fewer starts nationally next year."

The Bee Safe Storage facility is under review by New Hanover County planners, and is expected to again be on the agenda, after a requested continuance July 13, of a New Hanover County Planning Board meeting in September, according to the county's development website.

Not all planned self-storage projects made it off of the drawing board. The New Hanover County Board of Commissioners denied a rezoning for a self-storage facility in the 2600 block of North College Road in April. At the same time, projects also can't be denied simply because numerous other self-storage facilities are already in the works.

Donna Girardot, chairwoman of the New Hanover County Planning Board, said when it comes to rezonings and other requests related to self-storage facilities and other development, "neither the Planning Board or the County Commissioners can act in an arbitrary and capricious manner or based on bias or personal preferences or beliefs. We have to strictly adhere to the ordinance and the Four Findings of Fact."

Simplified, the four findings include whether the project materially endangers public health or safety, meets legal requirements, doesn't substantially hurt the value of adjoining or abutting properties, and has a location and character that is in harmony with the surrounding area.