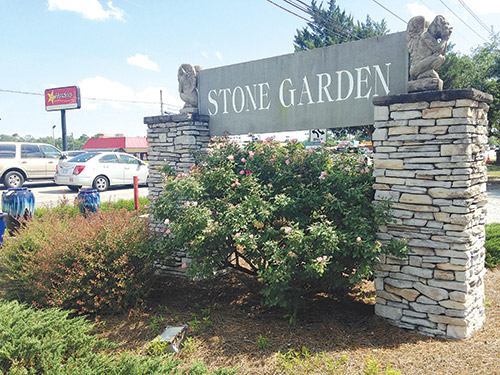 The Stone Garden has to eventually move to a new location because the business lies in the path of the Military Cutoff extension project. (Photo by Cece Nunn)
More than a decade ago, Stone Garden owner Nina Brown knew what was coming.

“Part of it’s a relief because I’ve been waiting since 2002,” Brown said June 12, referring to the Military Cutoff extension project’s effect on her business.

Opened in 1999 at 6955 Market St., Stone Garden sells natural and cultured stones for landscaping and gardens, along with fountains, ponds, mulch and garden ornaments, on a 3.5-acre portion of land owned by the Nixon family. But Brown will need to move her business because the property is in the path of the project, which the N.C. Department of Transportation is expected to begin construction in fall 2017. The purpose of the extension, for which the estimated cost is $51.6 million, is to ensure that the corridor can handle increasing traffic.

Two weeks ago, Brown got a “move offer,” or how much money she would receive to fund her move, from the DOT, in an amount that she said is very fair. But as a tenant she faces another difficulty outside of trying to find a new location for Stone Garden – the possibility of having to make two rent payments. A tenant has to continue renting a property until the property owner has concluded negotiations with the DOT for the amount of money the state owes him or her.

“You want to move forward with your life, and you wait and wait, and you finally get a move offer and you really can’t move,” Brown said. “This is the biggest challenge my business will ever face.” She added that she’s confident Stone Garden will move this year to a new location close by.

Stone Garden is one of 10 parcels in the extension’s path that the DOT hired a consultant to handle, said Brian Rick, local DOT spokesman.

Another is the property leased by Professional Building Supply at 111 Military Cutoff. There, managers are in the early phases of trying to figure out where the firm’s new location will be and when the operation will move, said Troy Wilkerson, Wilmington market president.

“It’s going to have a huge impact on our operation and potentially the county, depending on where we locate to,” Wilkerson said. “We have more than $30 million in sales and certainly pay sales taxes on those sales … not to mention the payroll that’s associated with the 40 employees we have.”

Currently, the business operates out of a 30,000-square-foot warehouse with 10 acres of yard, he said.

He said Professional Building Supply’s legal representation is helping the business through the process with the DOT.

According to Noelle Talley, spokeswoman for state attorney general Roy Cooper, an agreement has been reached for a settlement with Carl Shepard, the owner of 6931 Market St., another property
in the path of the extension project that is currently occupied by Jackson Hewitt Tax Service.

“DOT Right of Way is working with the owner on paperwork and attorneys with our office will assist as necessary,” Talley said in an email June 9.

Also in May, Gould Investments bought space at 219 Station Road in the Station Place office building for $540,500, according to a deed filed in New Hanover County.

The manager at Benjamin Moore Custom Colors Painting & Decorating, 6943 Market St., said the business is expected to move to a nearby shopping center.

Other properties affected include 7001 Market St., where a closed golf driving range sits; a gas station at 6980 Market St.; and Mr. Store It, a mini storage facility, at 6947 Market St.

While the possibility of having to pay rent on two properties is the biggest worry, Brown said Stone Garden’s move presents another challenge: transplanting 800 pallets and 23 bins of stones to a new address, along with everything from the earrings for sale at the gift shop to a three-ton boulder.