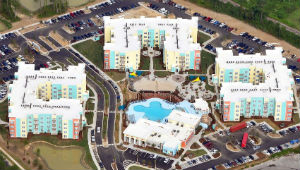 A California firm recently bought Progess910, a student housing complex near UNCW that was completed in August. (Photo courtesy of Progress Student Living)
A California real estate investment firm has bought a luxury student apartment complex in Wilmington, the seller said in an announcement Thursday.

Progress910, which was completed in August, and Monarch301, the Georgia property, are 97 percent leased, according to the announcement from Progress Student Living. The two- to four-bedroom apartments at Progess910 rent for $605 to $765 a month per bedroom, according to fall lease rates for the property.

“Each is located close to campus, is well-built, and offers a full slate of amenities that are popular with student renters,” said Andrew Weddle, a principal with Progress Student Living who helped develop, operate and sell both properties, in the release. “From an investment perspective, these are excellent assets to hold in a portfolio given their location, building quality and amenities, as well as the forecast growth in enrollment at both universities.”

University of North Carolina Wilmington's student numbers grew by nearly 11 percent from 2011 to 2014, with 14,570 enrolled last year, according to data from the UNC system's Institutional Research & Analysis website. University officials reported in August 2013 that UNCW's enrollment had set a new record when the number increased to more than 14,000.

“Jonathan’s expert knowledge of the Wilmington market and local land-use and development regulations helped us immeasurably as we built and then sold this project,” Weddle said in the release.

Progress910 consists of three four-story residential buildings on 16 acres about a mile west of UNCW's main entrance, with amenities that include a resort-style pool with poolside cabanas, a 24-hour fitness center and an activity room with a fireplace, lounge areas, billiards and ping-pong tables, the news release said. The units are fully furnished and come with 40-inch, flat-screen TVs, high-speed Internet connections and walk-in closets, among other features, according to Progress Student Living.

The announcement said Progress Student Living is a real estate development company founded by the principals of HighBridge Properties, a real estate investment, brokerage and advisory firm in San Francisco and Myrtle Beach; and Progress Builders, a general contractor and developer in Myrtle Beach that specializes in multi-family residential properties. The release also said that Progess Student Living focuses on developing properties near colleges and universities with enrollments of 10,000 or higher in markets throughout the United States "that have high barriers to entry."