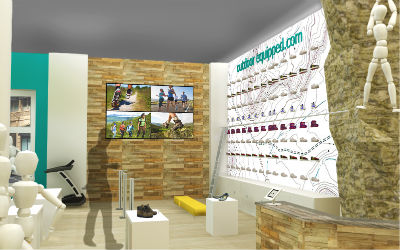 Renovations are under way in the first floor at 272 N. Front St., also known as the Self Help Building and the former Efird’s department store, for Outdoor Equipped’s 3,200-square-foot retail space, where the company will sell footwear, clothing and other products from makers that include Adidas Outdoor, Altra, Asics, Columbia and The North Face, as well as 2XU, Hurley, Helly Hansen, Salomon and Kuhl, a company owner said.

The store is expected to open in November, said Chad Hankinson, a Wilmington resident who owns the four-year-old company with his brother Mike Mayo.

This year, Outdoor Equipped’s revenues will be $30 million from sales through its website, outdoorequipped.com, and on Amazon. That amount is expected to exceed $50 million next year, Hankinson said. 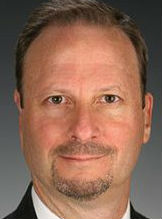 And while Outdoor Equipped has a warehouse near the airport, a retail space allows the business to be a more visible part of the city, Hankinson (at left) said.

“We wanted to be part of the community and part of revitalizing downtown. The store is in a great location in my opinion,” Hankinson said. Also, he said, “We want to offer the Wilmington area the products and prices that we offer online because of the volume we do.”

Hankinson bought a home in Wilmington five years ago when one of his four sons - all of whom have been students at the University of North Carolina Wilmington - said he wanted to attend UNCW. At that time Hankinson, who also has a daughter in elementary school, spent most of his time traveling as part of his previous corporate career.

Mayo, who was a pioneer in putting the wholesale insurance business on the Internet, started Outdoor Equipped when he left his job as a CEO, and Hankinson joined him in the venture about two years ago after leaving his job as president of a $100-million operating company of Dover Corp.

Outdoor Equipped employs 55 people, including its workforce in other countries, and the store will have 10 employees, who each have experience with outdoor and physical activities, including yoga. That will help the store set itself apart from others, Hankinson said, by offering an atmosphere where customers can easily get answers to their questions about products.

The store has been designed for convenience as well, Hankinson said, giving customers the option to order online if they need to and the ability to check out with their purchases as quickly as they want.

“We have four cash register set-ups,” Hankinson said. “A typical store would have one, maybe two.”

Outdoor Equipped is expected to continue to grow.

“My brother and I both come from technology businesses, and so we understand and leverage technology to our advantage,” a technology that enables the firm to list more than 300,000 products at one time, Hankinson said.

Outdoor Equipped also has a warehouse and logistics center in Utah that allows quicker delivery when working with West Coast-based companies like Columbia.

Salesmanship runs in the family. Recently, Hankinson discovered that the architecture of the Denver department store owned from 1896 to 1932 by his great-grandfather, Dennis Lewis, is eerily similar to that of the Self Help Building.

“What’s interesting is I did not pick this building even knowing this. I didn’t have any idea what it looked like,” Hankinson said of Lewis’ store, A.T. Lewis & Son.

Designated a local landmark, the five-floor structure at 272 N. Front St. was completed in 1907 to serve as a wholesale dry goods firm, according to the City of Wilmington’s website. Two stories were added in 1921, and then it became Efird’s department store, which closed in 1975.

For 14 years, the first-floor space leased by Outdoor Equipped served as part of a set for the TV series Dawson’s Creek and then One Tree Hill.

“It really did not generate significant economic activity for shoppers and visitors,” said Ed Wolverton, president and CEO of Wilmington Downtown Inc. “So getting a more active and public user on that corner is a very good step forward.”

The unit adjacent to Outdoor Equipped is also under renovation in anticipation of a restaurant possibly leasing the space, broker John Hinnant of Maus, Warwick, Matthews and Co. has said.

Some local companies are completing the renovations and design work for Outdoor Equipped and the building’s owner, Self Help. They include Uhl Inc., a general contractor, Commercial Interior Solutions and Signature Plumbing.